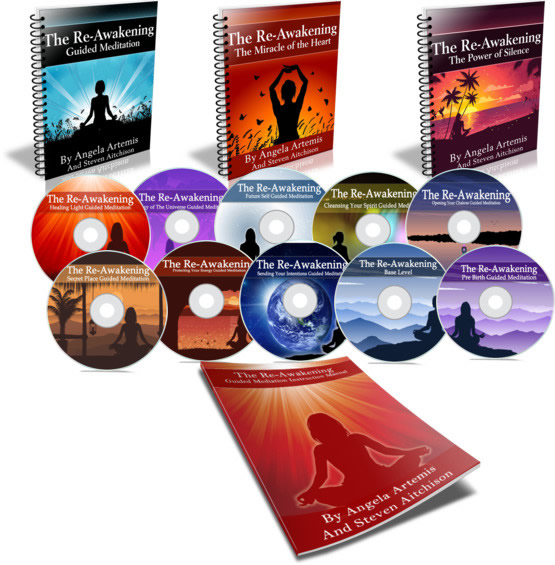 Over the last few months I have been a busy little bee working on a new Guided Meditation program called The Re-Awakening.   Myself and Angela Artemis have developed this into a full blown program designed to help someone rid themselves of stress, anxiety and depression "“ bold claims I know, such is the belief we have in the program.

But I don't want to tell you all about the program, rather I'd like to share with you the story of how it came about.

The Story of the Re-Awakening Guided Meditation Program

We all know the many benefits of meditation, there have literally been thousands of studies which show how beneficial meditation can be for physical, mental, and emotional health.   However I realised pretty early on that there was something missing from my life and it couldn't be categorised physically, mentally or emotionally.

I believe there is something that overrides all of these areas and it's the spiritual nature in all of us.   Now, when I say spiritual, I am in no way talking about a religious nature, this is not religious in any way shape or form, however you may interpret it that way.   I believe the spiritual nature inherent in all of us, the part of us that is in touch with intuition, the part that has higher thinking capabilities, the part that overrides the logic, emotion and the physical.   It's a place I have glimpsed on so many occasions when I was younger but it was such a brief glimpse that it seemed unreal.   I wanted to get more, longer lasting glimpses of this elusive higher nature we all have.   So my quest began….

The Path of Meditation

My quest took me on the path of meditation….

How on earth do you pick the one that's right?

Well, as in any area of life, you pick one and try it out for size.

I decided for Transcendental Meditation. I went along to a meeting and met a strange woman who told me about her practice and how she would help me, and how I would be given a special mantra to say and how it would only cost me £640 ($1,100)…What! I decided to buy a book instead but it didn't give me the techniques and the special mantra, it was all very secretive.

So I decided to try Breathe Meditation at home, really simple stuff, no special mantra, no cost, but after a few months I kept on asking myself Is this working? Am I sitting in the correct position, am I concentrating hard enough, I am concentrating too hard, do I pay attention to my thoughts or let them go…so many questions.

After a few months of trying various techniques and going to classes I came across something called Guided Meditations….Great, I could focus on someone's voice and get the benefit of relaxing at the same time – which is what meditation is – focused attention whilst relaxing in the moment.

I done this for a few months and the difference I felt was amazing: I was more relaxed at work, less stressed, I didn't feel anxious anymore, and was starting to accept many more invitations to go out and I didn't feel socially awkward…I'd cracked it….or so I thought….

When I got more into the practice of meditation I noticed the guided meditations I had weren't very professional, the voice would grate on me a little, the music was too intrusive or they were just too long, some of them 40 minutes…

That's when I decided I wanted to do my own professional guided meditations.

Using all the feedback I found on forums and asking lots of questions, I wrote some great scripts, learned hypnosis to get my voice tone just right, searched for two months to find a composer for the music, found the optimal length of recordings, and put in some other special ingredients and I recorded a few and they were great, apart from one thing….they weren't very professional sounding as I had recorded them with some cheap equipment…..

You can hear some of them here:

Guided Meditation – Well of The Wyrd

Guided Meditation – Meeting Your Future Self

You'll notice they are not professional sounding.

So I bought some professional equipment, software and made my office a sound studio, spending thousands of dollars to do so, and the outcome….much better, apart from one thing…

The next thing I had to overcome was learning how to speak in a relaxing, calm way and to induce a feeling of relaxation.   So, again I took a hypnotherapy course and learned it all   and I learned the secret three words that could induce anyone to relax.   So I incorporated all that into the Guided Meditation scripts, and recordings.

In the forums there was a lot of talk about male voices and female voices. About 50% of people preferred a female voice…As soon as I started thinking about finding a female business partner to record these with, I received an email from a blogging friend Angela Artemis…. about a guided meditation she had done …Perfect!

After speaking to Angela it turns out she teaches this kind of stuff and so The Re-Awakening was born. And Now After a few years in the making, myself and Angela Artemis have created, what we think is one of the best Guided Meditation Programs on the market.

Okay you've read the story now it's time to pick up the program.

Listen to a Guided Meditation

Click This Link to Buy The Re-Awakening Guided Meditation Program