I'm going to assume you exercise for your health and you're busy. You don't want to waste a lot of time.

And I'm going to assume you would prefer to reduce your chance of injury too. 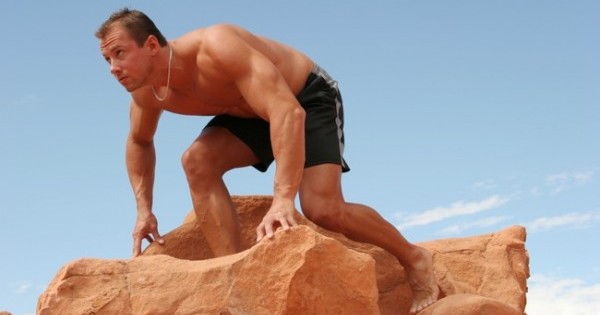 If so, then there is a simple concept you can apply to your training that will dramatically reduce your chance of injury, increase your caloric burn, and raise your overall level of fitness.

The Training of a Troglodyte

Trog-lo-dyte: noun; a member of any of various peoples (as in antiquity) who lived or were reputed to live chiefly in caves

Trog lived at least 10,000 years ago in a hunter-gatherer world. Exercise was random; fractal. Hunting to eat, climbing trees, running, fighting, sprinting, hauling heavy stuff. It was part of his very existence and he moved, naturally, through the entire scope of human movement – what's known as the six degrees of freedom of human motion – and trained his muscles, tendons, heart and lungs – his entire being – along the way.

When we move, our bodies travel through space in very defined pathways. These pathways are the six degrees of freedom.

A degree of freedom is just a displacement or movement of the body in a particular manner (and includes the three planes of motion):

Why The Six Degrees of Freedom Matter to You

Most of us don't hunt (for our meals at least), sprint for safety, wrestle (except with a remote). So, we "exercise" as a way of developing or maintaining our bodies.

Most exercise routines focus on one or two movement planes and 1 or 2 degrees of freedom at the most. For example, if your routine is pushups, pull ups, squats, lunges, and an overhead press, you're moving mostly in one plane of motion or direction. As a result, you can develop weakness in the muscles, tendons, ligaments that are not used during those movements. Over time, this is how you develop muscle imbalances and even over-use injuries.

Optimal health is dependent on optimal movement: balanced, strong, fluid motion. Trog achieved this through his daily existence. We have to plan our movements through training since many of us are desk jockeys. We have to think about how to use the six degrees of freedom to achieve a balanced, strong body.

Now, this may sound difficult but here are a couple of examples, using a few of the exercises I listed above, to give you an idea.

How to Change Your Exercise to Move More Like Trog

You can get the benefit of more degrees of freedom in your exercises by adding planes of motion to your movements or by resisting movements into another plane of motion.

Push Up: The push-up, as typically performed, has one degree of freedom – moving up and down – but is also resisting another movement – swaying. If you fail to hold the push up position – body straight – and allow the hips to drop, that is a swaying  motion.

Lunge: The lunge has two degrees of freedom: moving forward and moving up and down. You'll need a staff, broom handle, or a light bar for this drill. In a standing position, hold the staff directly overhead. Now perform a lunge. At the bottom of the lunge, turn your body to the side of the knee that is up (see image). You've now added another plane of motion (one degree of freedom) giving the lunge three degrees of freedom.

Bicep Curl:  I generally am not a fan of isolated body part exercises like a bicep curl but this drill has a twist.

By standing on one leg and holding the dumbbell in the opposite hand, you create an asymmetrical load.  So, as you perform the curl, the combination of the dumb bell and standing on one leg exerts a force in a second plane of motion. And although this doesn't technically add a degree of freedom to the movement, it gives your muscles a new force to adapt to.

Almost any exercise can be adapted to either add another plane of motion or resist moving into another plane. And as you do this, your body is forced to adapt to a wider variety of loads and movements. Much more Trog-like.

Trog moved without thinking about it through the six degrees of freedom and developed a strong, lithe body as a result. With a little bit of planning and thought, you can create a similar effect in your exercise routine.

Thanks for reading and let me know your views on Trog and the six degrees of freedom. To learn more cool stuff like this, click here.

Doug Kelsey is an innovative and creative performance coach, teacher, writer, and physical therapist whose specialty is helping people build resilience: fitness across multiple domains. He has conducted over 20,000 consultations and 100,000 training sessions with people ranging from professional and Olympic athletes, to weekend warriors, and moms and dads who want to feel better, be in better shape and enjoy their lives. You can read more of his work here and follow him on Twitter here.