If she touches the back of his head one more time, I don't think that I will be able to finish my meal. I take a quick drink to try and keep  what I have eaten down.

I look across at my wife and I can see that this sickly display of public affection is having the same affect on her appetite. We do that smile to each other that really says "this is pathetic but I'm  going to pretend it's cute". 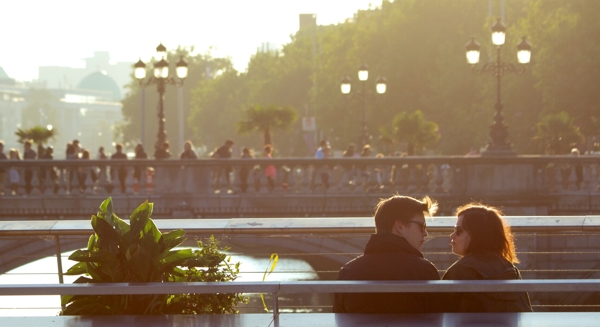 "So tell us again how you guys met?"  I say trying to break the infatuation long enough to remind them that there are other people at the table.

They recount the love story but this time with much more enthusiasm, and detail. "Well,  as you know, Steven is a doctor"¦."   I take the opportunity to eat while I can, nodding every few minutes, to show that I still care for the answer. I'm thinking that at some point surely they will change the subject or even  ask us a question, about anything!

I start to fantasise about discussing more interesting topics like knitting. "I really love the intricacies of the cross stitch" I nearly say aloud.

They have finished their story but rather than move on to the cross stitch they are back to staring into each others eyes. She is again touching the back of his head, but this time it is ok, I have finished what's on my plate.

For the record, I am not anti-romance or love at first sight, for that matter. It is just that, I find that when people have their heads in the clouds they often don't see the crash coming. I have seen the same thing happen in relationships and jobs. One minute they will tell you how wonderful everything is and the next why they had no choice but to leave.

On this occasion with their head in the clouds the crash did come. With in two months of our  little romantic dinner for two, unfortunately with four at the table, they had broken up.

My poor wife had to sit through the whole breakup over the phone only this time with just as much enthusiasm, and detail as the original story of how they met.

"He was never right for me" she now says. "You know, he was a doctor?  Well, he was addicted to his own prescription medicine. He used to get violent".

Perhaps if these people, and I'm not saying that I have never been one, had simply dialled back the enthusiasm 10%, just below cloud-level, then the relationship or job would have a better chance of survival?

But how do you know if you are in love with the ideal or the reality?

There a few simple acts that will help you make the transition from honeymoon to reality without killing the thrill of the moment.

If you can see the con's for what they are then perhaps you can work together to overcome them. It is better than ignoring them altogether because if they are not an issue now then they may be a bigger one later on.

2. Take a breath to let reality catch up

Rather than spend every moment together perhaps you should allow time for you to reconnect with the world and get a better perspective on everything. At the very least this might renew your energy for Honeymoon Phase 2.

3. Agree to accept each other for the time being "for better or worse"

Don't be afraid to call out the issues as you see them. Find out where the deal-breakers are and decide if they are worth it. For instance, my wife was willing to sacrifice having a husband with abundant  locks of beautiful hair, or very much hair at all, for the upside for my incredible intelligence and sensational wit. (I think she got a good deal)

So the next time you lean across to hand feed your partner at a restaurant dinner table, take a quick look around and make sure that you are indeed alone. Your appetite for love may be spoiling others appetite for food.

I am a father of 3 and have spent over 20 years in Sales and Customer Service within the IT Industry.

My blog discusses the Tipping Point moments in my life where I have learnt important life lessons that I am looking to share with like minded people. These moments often occur through my private life, career or even my struggles with Anxiety and Depression over the years.

My Blog, TheWeeklyTippingPoint.com , is mainly about personal and career development and the pursuit of happiness in general.

Two of my most popular posts include

5 Tips to Master the Language of Success

You are only as sick as your secrets - My Salute to R U OK? Day