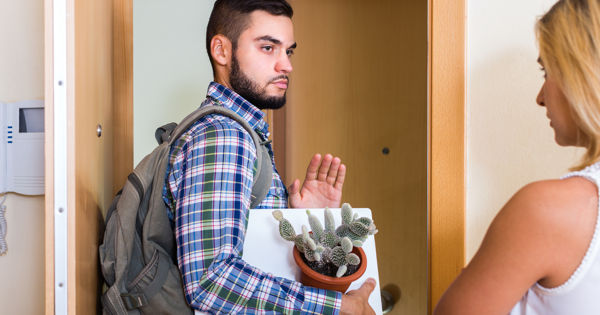 You guys have been hanging out since elementary school. Besties then and seemingly besties now. But wait. You're starting to get that feeling. You know, that feeling like you really don't want to sit and chew the fat with them anymore. That feeling where they are actually almost starting to annoy you. That feeling. What happened? Could it be that maybe it's time to dump that friend?

People change. We grow, we learn, we rise and we fall. Some mature, others, not so much. If you are one of those people who have grown, learn and matured and maybe your friend hasn't, well, it could be time to say see ya later. Here are a few reasons that may sound like something you are going through right now.

There once was a time where partying til sunrise was a thing. A fun thing. You're not there anymore but your friend is. He/she still wants to do that. Every weekend. You don't mind going out every now and then, but every weekend? No thanx. You are perfectly happy sitting at home on a Friday night and watching a good movie or having a nice conversation and a few laughs with some friends.

They are still going on and on about what happened back in high school with that mean teacher. Or what about that girlfriend who dumped them because they drank too much. They just haven't been able to let go of the past and all they want to do is gripe and bitch about it. You are completely over it and moving on. In fact, bitching and griping just isn't your thing. This repetitive conversation is starting to take its toll on you and you are no longer interested in being a part of it. It's boring and old.

It was fun to sit around and drink and talk about people and moan about your job and all that negative stuff. But you've switched gears lately. You aren't that negative person anymore. Recently you've been mastering the art of turning negative into positive and long to have only positive experiences and people in your life. Your friend? Not so much. They are still full of negativity with no hope of them coming to the brighter side. It could be time to say bye.

You are growing and learning. Expanding and evolving. So much to learn and new people to meet. Not your friend. They don't want to change. They are stuck where they are and whether or not they are happy there is questionable. What is clear is that they have no plans of changing.

5. They really are kind of boring.

Their talk is boring, their lifestyle is boring and nothing has changed. At all. They are stuck in their old ways and are not interested in doing different things or trying new things. You suggest new places to go and new things to do but their response is always no. You've tried to get to the bottom of it to no avail. It's just time to move on. Life is short and fun and precious. You know that. Your friend doesn't see it like that.

6. What are we hanging on for?

You have been hanging on to this friend because it reminds you of fun times from your youth. Trouble with that is, you aren't there anymore. You are an adult now and you both have changed so much. There is nothing to hang on to anymore but a distant memory. It's ok for it to remain just a memory and it's also ok for you to move on. Go ahead.

It's hard to say goodbye to old friends but people grow and change and move on. It's ok. Let them go. Make room for like minded people. Your tribe.