Ok. So a lot of people think that being rejected is the worse thing that can happen to them.

I believe part of that is because we are so conditioned to seek acceptance from society. I mean, come on, nobody wants to be a total freak. 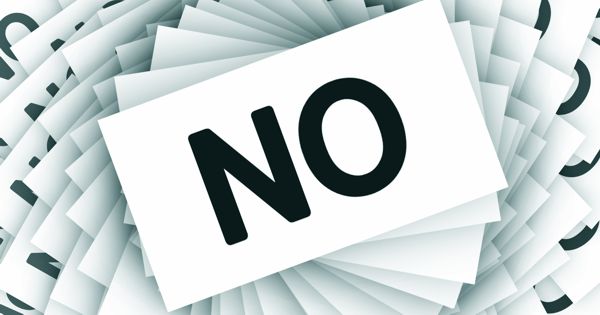 But in all seriousness, people tend to see non-acceptance as a sign of non-worthiness. When some people get rejected, they take a huge blow to their self-worth, and the result is a mangled pile of rusted self confidence.

On the other hand, when a person responds positively to rejection, the hammer of worthlessness doesn't have the opportunity to smite them.

In fact, when rejection is properly channeled, the person can learn and grow from the experience, and come out of the situation much better than if they had just been accepted.

Let me tell you a story about a friend of mine who is a poet.

Yes, a poet. Okay, maybe that's not his full-time day job, but he does make some decent money at it"¦ so in my eyes, he's a poet. I'll keep his name a secret so I don't embarrass him. (Some people would rather not be associated with me, for obvious reasons).

Part of being a poet is sending out poems to try and get published, and if you're at all familiar with the career of a writer, you know that writers get lots of rejections.

It's no different for my friend.

He started by sending out one poem, seeking acceptance in a famous poetry journal.

Guess what? He got rejected.

So he decided to write a handful of poems, and send them out to different literary journals.

To his amazement, a couple of them got accepted.

So he wrote a handful more, submitted those to several journals, and while he was waiting to get responses, he wrote another handful of poems and sent those out.

So he got a few more poems accepted, and all the rest were rejected.

Pretty soon he developed a system of writing a little bit each day, and sending out poems to different journals on a regular basis. He accumulated a growing pile of acceptances, and a big, fat, steaming pile of rejections.

Fast forward a few years, and now he has three books of award winning poems, he's the winner of several of the most prestigious poetry awards, and his poems have appeared in well over a hundred literary journals.

Even though he experienced rejection after rejection, he chose to focus on the acceptances, and realized that rejection was just a necessary part of the process. In fact, he would go on to review editor comments and learn why he was rejected. He would revise his poetry and re-submit it to other journals where they were eventually accepted. He learned from his rejections the rules and types of submissions that particular journals like, and as a result he started to get accepted at a much higher rate.

Instead of rejection being a sign of his worthlessness, a dirty label slapped on his back, he used that rejection as an opportunity to increase his value as a poet. Each rejection was not a curse, but rather another opportunity to perfect the poem and send it elsewhere.

One of my favorite quotes about rejection is from the sporting world which has been attributed to Michael Jordan and Wayne Gretzky, among others:

How true is that? If you're not willing to step up and try, you'll never be able to accomplish anything.

You've got to keep taking the shots, or else you won't grow and develop yourself into what you want to become. You've got to learn from the rejections, and approach the next shot smarter and with more diligence.

Then, you can turn all the rejection around, and enjoy the benefits that even the smallest acceptance can provide.