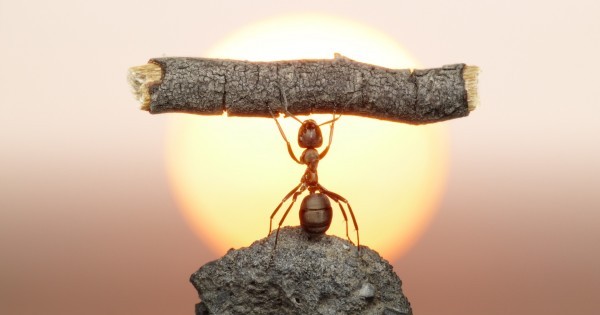 If the answer to any of these is yes, read on"¦

In 1996 I had an existential crisis that changed my life; in some ways the cause of it was my method of goal-setting.

At the time, I had leap-frogged my way into professional writing, jumping five years of journalistic grunt-work to suddenly be writing at a top selling publication in the UK.

I was working with some of the best writers in that section of the industry, my salary was increasing every few months and four million people a week were reading my writing. I had money, a career at 22, and I was fulfilled. Or so I thought.

One day I was walking along the street when a thought struck me like a punch with a wet cold rag: "˜Is this IT? Is this all I have to look forward to for the next twenty years? Earning money and buying stuff?' (I acknowledge to those in less fortunate circumstances this may seem unbelievably petty.)

I was struck hard by a kind of horizon-less despair and not long after I started studying the Bible until a few months later I became a Christian.

Why the mini-biography? Because as I tease out the structure of what happened "“ and what I learned years later to do about it "“ it reveals powerful insights about some things that might be missing from your goal setting philosophy"¦ things which, if you realize them now, could help you stay motivated for years to come and avoid the enormous drop I experienced. (Of course, I would also say that drop led to something much better so it's all good!)

Want to know more? (That was a Starship Troopers joke for you sci-fi geeks out there"¦)

What had happened was that I had achieved an Ultimate Goal. This in itself what not a bad thing. It was just that BY itself it led to my crisis"¦

A few years before I left a job in a timber yard to pursue becoming a writer. I took my college courses then moved onto a journalistic degree. Before I had finished the degree I was offered a job"¦ and suddenly I had achieved what, at the time, was my life goal "“ to be a professional writer working in the media. At 22.

Do you get where I'm going with this?

When I became a Christian I again had a set of meaningful goals to strive for. One, was to imitate Jesus, which is, frankly, an endless goal because Christians believe he lived a perfect life and we don't.

Life improved for a number of reasons but the ones I want to mention here was that I now had:

a)       Meaningful goals beyond my current goals

b)       Goals that, should I decide it so, are actually a never-ending series of improvements rather than a one-time Ultimate Goal to aim for.

This is important so pay attention.

Silvia Hartmann, a millionaire, and author of Mind Million explains it like this: "˜As soon as this [getting your first yacht, Mercedes, castle] has happened and was experienced, "¦people"¦ have to start looking for something else and something new, something even better still.

That is how people are built that's how our neurology is designed "“ to never stand still but actively seek out BETTER AND DIFFERENT experiences, as long as we live.

She explained that the trouble with only having one goal was that "˜people…THINK if only they can get that first Mercedes [or anything you desire] then EVERYTHING will be blissful and STAY blissful. This is the "˜happily ever after' delusion'.

When you think of it as the FIRST"¦ OF MANY houses/cars/businesses (eg. A house in the UK"¦ and Germany"¦ and Miami and then?) then, as Hartmann says: "˜the first goal doesn't have to bear the burden of making you happy and keeping you happy for evermore; it becomes a stepping-stone or a door that is now open and leads to whole new set of unfoldments.

It doesn't take anything away from the fun and excitement of the FIRST GOAL, in fact, it makes it much, much more exciting, because"¦[As a result]"¦ we now have an evolution of goals that can start much smaller, become much more affordable and available; the goals become springboards to greater and brighter things, all along the way. And they become achievable."

She uses the Golden Goals Line "“ the exercise is reproduced below from her book Mind Million (no longer available)   :

So, here is our exercise.

2. If they are not, we go back to the drawing board and re-define goals to create a golden goal line that powers you into the future.

Make sure that your next and upcoming FIRST GOAL is completely achievable, and that in achieving this you are paving the way to the next goal.

Make sure that your first goal is something that will make you proud and happy when you have achieved it.

Make a line of at least 3 goals in a row that follow from one another logically and quite easily and write them down across a piece of paper, with the beginning and easiest goal at the bottom, closest to you, and going up to the further, higher goals.

Notice how the WEIGHT of the greater goals are creating a strong motivational pull to get started on the EASY AND ACHIEVABLE goal at the bottom.

Can you understand this principle, FEEL how it works?

If you can, then you have just achieved one of the most crucial understandings on motivation and goal setting there is.

The golden goal line is a UNIVERSAL principle that works regardless of what the content or context of a goal might be.

Success is in the Striving

A complimentary philosophy to the golden goal line is the idea (supported by Robert Ringer, author of Action and Millionaire Habits) that happiness is found in the striving for goals, not simply the end result itself. And if you are not convinced by this, consider these points.

a)       If you are always focused on the BIG end goal, some part of your mind will always consider you a loser until you actually achieve it. You will always NOT HAVE the end goal until you have it"¦ possibly years later. (Thanks to Scott Adams, creator of Dilbert, for this insight).

b)       Therefore, it just makes sense to enjoy the larger part of the process, which is all the little goals and hours of practice you have to do to build the big one. Yes, you can choose to be happy about the "˜journey' AND the destination.

Adams supports "“ and yet actually goes further than "“ Hartman and Ringer, and suggests that we stop thinking of ourselves as having BIG goals per se. Instead, we think of ourselves as aiming eternally for improvement with the bigger goals as just part of the journey towards excellence. That way, the motivation will never be blocked by the idea that it will just end.

Adams says that if you do something every day that has the overall effect of making your life better then you have a system for improving (for example drinking water and exercising). But you don't have to start off with grand sweeping actions"¦ in fact, you can start off"¦ tiny.

I first came across this concept in One Small Step can Change a Life and later, in more convincing detail in The Compound Effect. It can be summed up thus:

Small decisions, consistently taken, can add up to destiny"¦or destruction.

For example, each day I practice "˜no-mind' holding 15 seconds or more of blankness in my mind. I am up to about 22 seconds at the moment. At first I couldn't go beyond six or seven seconds.

Andy Shaw, creator of a Bug Free Mind, and another millionaire, says that this is the foundational skill for creating a life of your dreams "“ to be able to control your own mind. He says that ANYTHING he teaches you when you don't have this skill will not work to its full effect.

So I practice a few minutes a day"¦ and I am now able to quiet my mind much faster than before. This tiny thing, practiced consistently is having a compound effect on my life.

What could you do consistently that would add up over time"¦ and I stress TIME because you may not see results instantly? Keeping well hydrated is a daily discipline that bears much fruit in its positive effect on the rest of your life.

Anthony Robbins says the Japanese call these ideas Kaizen – and he calls it CANI "“ constant and never ending improvement!

If you're not in the habit of making everyday improvements then try this"¦ pick one area of improvement and do something to improve every day for 30 days. For example, when I was studying Provocative Coaching I would write out provocative statements every day until it became second nature.

Doing this is not just useful for improving "“ it gives you a real taste of what continuous improvement feels like.

So, in summary "“ keep adding at least three meaningful goals beyond the completion of your current goal; breathe a sigh of relief as your improvement and therefore attainment never has to end and if you need to, take baby steps because you are still moving forward.

To infinity and beyond!