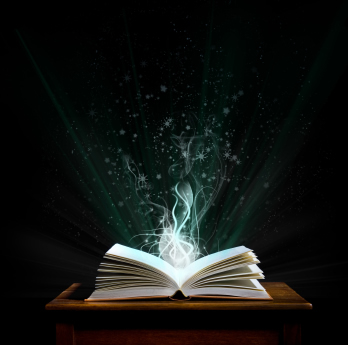 "Words and magic were in the beginning one and the same thing, and even today words retain much of their magical power. By words one of us can give another the greatest happiness or bring about utter despair; by words the teacher imparts his knowledge to his student; by words the orator sweeps his audience with him and determines its judgments and decisions. Words call forth emotions and are universally the means by which we influence our fellow creature. Therefore let us not despise the use of words in psychotherapy." (pp. 21-22)

"Reality", said John Lennon "sucks, but it's the only place you can get a decent steak."

In just a few minutes during "Imagine" he did just that, verbally weaving a vision of the world as a unified "˜brotherhood of man'. And it must have been memorable because it became a poster song for a generation and is still played today.

In today's post we're going to look at the affect our words have on our sense of reality and how changing the way we use words can rapidly shift our sense of what is real for us.

You'll find that by changing not only the types of words you use (and leave out) but also by changing the order of the words – even creating NEW words – you can get your perceptions unstuck in subtle ways you might not have considered before.

Nerd warning: unlike most of my posts, this one is a bit nerdy as I love experimenting with language. However, if you give some of these things a go and pay attention you WILL notice the difference in the way you think and feel.

Most people don't appreciate just how much of a spell words do cast over our brains. Our minds don't just remember words as pure information, they exist on and because of words, using them to dynamically construct and shape our perceptions and moods for the better and worse. If we buy into their spell too much we can be stuck for life!

When a person is hypnotized they can be convinced of things like they only have nine fingers or that a cardboard box weighs a ton.

But in a way each ordinary word hypnotises us because we automatically process it as whole without thinking too much about how it is constructed or what effect that construction has on our internal representations of it or our actions thereafter.

To get a sense of this do this exercise from The Talent Code: Try to memorize these two sentences.

We climbedMount Everest on a Tuesday morning.

How did you do? Was the second one tough?  I expect so.

In fact, the two sentences contain the same characters…except in the second sentence the order of those letters is reversed. Not so easy to process the whole now is it? "¦ but until you saw the second sentence you were under the spell of reading"¦.words.

Words make up our concepts of the world, what some call our mental map. And if that map, the guidelines you use for negotiating life makes you stuck, you need to start changing it to get moving again.

So how do we start to break that spell? You change the words.

Get your mind moving again

Start by putting the movement back into your descriptions. We describe much of the world using words called nominalizations which are verbs that have been linguistically frozen into nouns thus making the world seem unchangeable.

Anger: (I feel so much anger)

Depression (I am stuck in my depression.)

Love ( There's not enough love in this relationship!)

Motivation ( I don't have any motivation.)

If we turn these words back into verbs it creates mental movement "“ and the promise of change. So:

How can you start Love-ING yourself?

How are you depress-ING yourself (rather than being stuck IN depression)?

There's a world of difference between "I can't get rid of my anger" and "How am I angering myself?"

Essentially, when you feel stuck ask yourself if the words you are using make it feel like things just ARE. If so, look for words that could be turned back into verbs. They sometimes end in "“'ion' – so verbify them again by asking "How can I start x-ing again?"

Robert Dilts, Neuro-Linguistic Programming expert says ""¦ adding "ing" to a word, often results in [internal sense of] movement to whatever inner representation a person has for that word. Take words like "hand," "sled," "flower," "bite," or "sleep," for instance….Adding "ing" to produce "handing," "sledding," "flowering," "biting" or "sleeping," typically immediately brings in or increases a sense of movement with respect to the inner representation.

Try this out with some other words; such as "rock" –> "rocking"; "smile" –> "smiling"; "e-mail" –> "e-mailing"; etc. Notice how adding the suffix alters your internal representations.

It is also interesting to do this exercise with respect to words that we do not typically associate with the ending "ing." Think of some words like "phobia," "cancer," "victim," "problem," etc. Add the suffix "ing" and notice how your perception of the experiences or phenomena to which these words refer changes (i.e., "phobing," "cancering," "victiming," "probleming"). It is probably different than the way you normally think about it. It may even prompt you to smile or laugh, because it seems incongruous or unusual."

The above is just the tip of a radical (if weird) aspect of linguistics called Transderivational Morphology which refers to playing around with the structure of words by altering the prefixes and suffixes You can find full details at :  http://www.nlpu.com/Articles/artic27.htm

You would not believe the difference this makes even though it can sound really silly! As an example, consider the following word victim and its 'alterations':

Could you ever think of the word victim in the same way you did before? No? That's the point. It might just be enough to get you unstuck.

As Dilts says : "One of the main applications of 'transderivational morphology', in fact, is to shift our internal response to key words that constrain or limit us, by playing with the structure or morphology of the word. In the following exercise, for instance, words associated with problem states are "defused" by substituting alternative prefixes and suffixes.

So try taking words that are semantically significant to you and changing the beginnings and the endings:

There's a brilliant exercise to be found here which contains all the prefixes and suffixes – give it a go.

Sometimes you just need to stop using certain words. Susan Scott in Fierce Conversations suggests substituting "and" for "but" as in:

The word "but" tends to negate what comes after it whilst "˜and' acknowledges that there exists more than one part of reality: "you feel good" and "it's also raining". One does not do anything to the importance of the other.

Dilts, in his book Sleight of Mouth, suggests using 'even though' instead of but as in "I feel good even though it's raining."

Remove IS from your language

If you really want to experience reality different you can make a massive contribution to getting unstuck by describing the world using e-prime.

Count Alfred Korzybski, creator of General Semantics believed that the 'to be' verbs "I am, he is, they are, we are etc" promoted unsanity – the idea that things could be exactly equal.

This may seem trite so consider what happens when you say "I AM a failure." You equate yourself fully and completely with the idea of failure.  No wiggle room. This X = Y creates all kinds of mental anguish and it doesn't need to because we never can reduce ourselves to single concepts. You believe yourself to have more complexity than that, don't you? Yet unconsciously accepting this languaging constrains us to believe we operate as nothing more or less than the idea we identified ourselves with.

So e-prime was developed by taking all of those verbs out of the language. Speaking and writing in e-prime forces you to think in more accurate terms and makes you describe life in terms closer to reality.

"He seems to have no sense at-all."

Which is not at-all the same as :

I think it possible that a great deal of mental stuckness comes from insisting that the world exists stuck in absolute mode. Remove the absoluteness of IS, and free yourself to describe the world in terms of movement and flow – the way it does exist.

If you want to read more about the effects of language and how to use it to free yourself, try Drive Yourself Sane by Susan Kodish.

(By the way, everything I wrote since the word 'Count', I wrote in E-Prime.)

Stop demanding that things ARE, add some ing and try acknowledging how complex reality can seem, with 'and' and 'even though'.

Start learning how you construct your world with language, and you can break free of some of those limits.