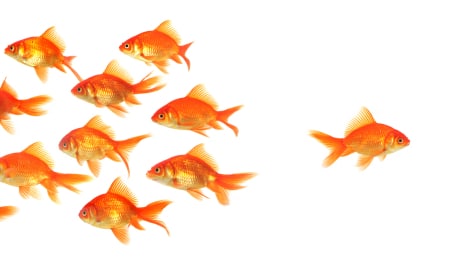 So you're stuck, and don't know what to do.

Rather than sit there doing nothing, take a look through these five ways to figure out a next step. Different ones will work for different circumstances and personalities. But if you have a negative reaction to one, don't necessarily dismiss it – it might be exactly what you need.

Seinfeld's friend George isn't the only one who can succeed in life by doing the opposite of his first impulse. If you feel stuck, then probably what you've been doing up until now isn't working too well. Rather than doing something completely unrelated, put some thought into it and find something about what you've been doing that you can reverse.

Have you been trying to make sales by phoning people? Write letters that give them a reason to phone you.

Always falling for the wrong person? Go out with someone you don't think of as your "type".

Yelling at your teenager and making no headway? Talk quietly and find things you can agree with them on. (The shock may make the teenager think.)

Whatever you do, break the pattern, because the pattern clearly isn't working for you.

A classic method of provoking creative thought is to grab a dictionary, open it at random, stab your finger down on a word, and then look for how that word is relevant to your next step.

Because there's an Internet tool for everything, you don't even have to get off your chair and find a dictionary. Just use a random word generator.

I just got "absence" as my random word. That leads to the thought: What am I doing now that I can leave out, as a creative void for people's thoughts to fall into?

The phrase "intermediate impossible" comes from Edward de Bono, and it means something which isn't a solution itself, but which could lead you to a solution. His classic example, to deal with a polluting factory, is "the factory is downstream of itself". This led to the idea of putting the factory's water intake downstream of the water outlet, to give the factory an incentive to reduce pollution.

Write down all the things you can think of that aren't solutions. Now pick one and think: If I started off in that direction, where might I end up that would be a solution?

Do Good By Stealth

It's as if, when we're paying attention directly to the problem, we're holding it too rigidly in our brains. When we let go of it a bit, it can shift into a form in which we can solve it.

Eat a Spoonful of Elephant

How do you eat an elephant? One spoonful at a time.

It's a lot easier to keep moving once you've started.