"How "˜bout a shot of truth in that denial cocktail?" "“ Jennifer Salaiz

Denial has a bad rap.

The truth is, we need denial sometimes.

It protects our minds and bodies against information that is too overwhelming to process all at once. 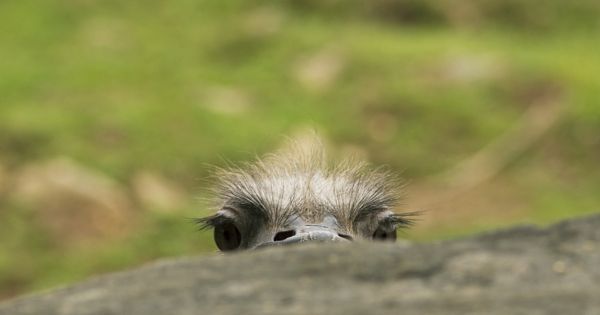 Denial is what causes that feeling of being lost in a giant cotton ball after you've received shocking news. It gives your brain some time to work through new information and gain perspective on it.

Denial can last for a short time or a fairly lengthy period. When my late partner, Ruth, was diagnosed with Stage 4 breast cancer, it took about a year for us to completely come out of our denial that the disease would take her life.

After her first course of chemotherapy, Ruth's cancer went into remission. When it reappeared at the end of that first year, we finally acknowledged that she would never be cured.

But that year of gentle denial was helpful for us. It gave us hope and allowed us to develop practices and support systems that would help us further down the road when things really got tough.

When denial gets in the way

But what would have happened if we had persisted in our denial?

We would have missed out on the richness that life took on when we realized that hers was going to end soon.

And I would have been completely blindsided and traumatized by her death if I hadn't accepted that it was going to happen.

Denial is one of the many tools we employ to keep ourselves as together as possible.

When something arises that threatens to pull us apart and away from the normal we once knew, we quickly put on the brakes.
But, while possibly helpful in the short term, denial only gets in the way of being able to problem-solve and utilize other means to bounce back from adversity.

I worked with a client who came to me for therapy because she was feeling very angry toward her sister.

My client, Mary, thought her sister was enabling her adult-age son, Mary's nephew, to continue his anti-social ways by bailing him out of jail, fixing his financial problems, and allowing him to stay in her home.

A few sessions later, as she was telling me more of her frustrations about the situation, she said that she had written letters to her nephew's probation officer.

However, she had sent the letters as though they were coming from her nephew when, in fact, they were written by Mary.

"I just don't want him to get into more trouble by not checking in with his probation officer," she said.

When I gently reflected her own enabling behaviors, Mary was shocked.

And she never returned to therapy.

It was easier for her to stay in her denial story that her sister was the problem, rather than admitting she was also adding to the situation in a negative way.

Denying a problem exists can have lethal consequences, too. One day as I sat in a restaurant, I saw an acquaintance walk by. She had a huge lump on her neck. Later I found out that she had noticed the lump over a year ago, but decided it wasn't anything to worry about so never went to the doctor.

A few months after I saw her in the restaurant she died from advanced lymphoma.

Denial is okay. Until it's not.

You've seen it in yourself and others.

The person who thinks the bank isn't really serious about foreclosing on his house.

Your co-worker who thinks a bottle of wine with dinner every night isn't a problem, even though she keeps getting in trouble for coming in late.

That voice inside your head that says, "It's okay to buy this iPad with my credit card. I'll pay the minimum due this month and get caught up again next month."

While short-term denial gives you time to adjust to your current setback, long-term denial only digs you a deeper hole.

And denial doesn't only apply to the big crises in our lives. Do any of these situations that we deny sound familiar to you?

From run-of-the-mill issues to the serious storms in our lives, denial can easily lull us into inactivity which only magnifies the problem.

So the first step away from denial and toward acceptance is to call a spade a spade. Truly see what is in front of you:

But how can you determine whether you're in denial or not?

Four ideas for coming out of denial

Are they expressing concerns about your behavior or a situation in your life?Have you heard any comments said "jokingly", such as:
People will often hesitate to say something directly about your denial, but they may be giving you plenty of clues if you're actually listening.

What's that old definition of insanity? Doing the same thing over and over and expecting a different result.

If you keep running into the same problem all the time, stop!

Are you so deep into denial that you don't see that you're doing the same thing repeatedly that gets you into trouble?

It can be very difficult to get an accurate picture of your circumstances when one of life's storms is raging all around you.

Use a friend as a mirror and ask them to reflect back to you how you're doing. Ask them to be very honest and to point out any areas of reality that you might be missing.

Imagine that your friend is in your current situation.

Notice how she is behaving.

Is she in denial about the problem?

Now it's your turn to "˜fess up. When have you caught yourself in a serious case of denial?

Psychotherapist Bobbi Emel specializes in helping people face life's significant challenges and regain their resiliency. Download her free ebook, Bounce Back! 5 keys to survive and thrive through life's ups and downs. You can find her blog and follow her on Facebook and Twitter.