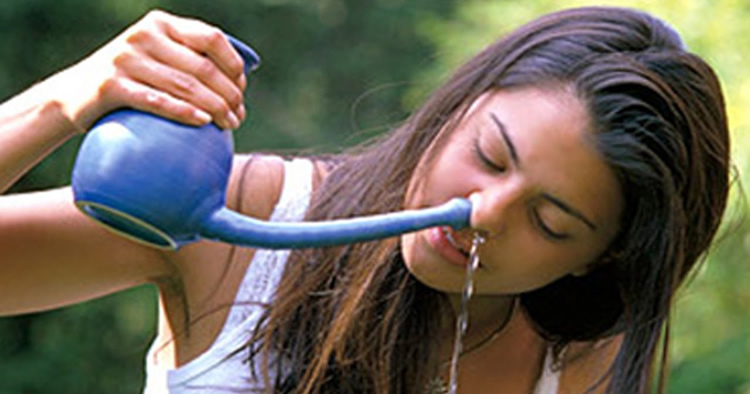 I first discovered Jala Neti after reading a book The Breath of Life: Mastering the Breathing Techniques of Pranayama & Qi Gong which was a great book all around. It described a way to clean out the nasal passage which I thought looked extremely weird. Basically it involves getting a little teapot like jug, putting warm salt water in it and then put the spout up one nostril tilt your head and let the water flow out the other nostril.

Sound weird, well it is until you actually do it and discover the benefits of it.

What is Jala Neti?

Jala neti is an ancient Indian yoga technique, meaning literally "water cleansing". Jala neti, though relatively unknown to western culture, is a common practice in parts of India and other areas in south east asia, performed as routinely as using a toothbrush. It is performed daily usually the first thing in the morning with other cleansing practices. Sometimes it is done more often such as at the end of the day if you work or live in a dusty or polluted environment. When dealing with problems of congestion it can be performed up to 4 times a day and has been shown to speed up the healing process for common colds.

The Neti pot (shown left) is filled with warm water, as I mentioned before.

The spout is inserted into one nostril, the head is tilted, as shown and the warm salty water flows through one side of the nasal cavity to the other and out the other nostril.

For those who may not have much idea of the internal workings of the nasal cavities, it may seem like a stupid or even dangerous thing to pour warm salty water through ones nose. But when examined with an open mind and a simple picture of the physiological structures involved, fears and misunderstandings can be cleared up. The first line of nasal defence are the tiny hairs called "cilia" which should trap larger particles entering the nose. These cilia are usually cleansed by the act of normal breathing and by blowing the nose, but sometimes, due to a gradual build up of dirt, they can become clogged and may require washing out. The whole of the nasal passages from nose tip to throat (and beyond) are covered with a layer of mucus. This mucus is secreted from within the mucous lining, and its function is to trap smaller foreign particles and bacteria. The dirty mucus is normally blown out, snorted and coughed out or swallowed. The sinus passages are an even finer mechanism of filtering which, if infected, secrete a runny mucus to evict the germs. This is generally called sinusitis and can be a short term symptom or a chronic condition.

In Stage 1, the water simply flows up one nostril to just above the bridge of the nose where the usual air flows meet, backwards into the middle cavity and then the water flows down and out the other side of the nose. In this route, it passes by the frontal and mid nasal sinuses. In Stage 1 there should be no flow of water back towards the throat or into the mouth. When done correctly, there is usually very little sensation as the water will be the same temperature as the blood, and the salinity will be the same salinity as the blood. As a result, the nose hardly notices the flow through.

In the more advanced of Stages 2 and 3, only attempted after mastery of Stage 1, the water flows fully through the whole nasal cavity, down the back of the nasopharynx and comes out through the mouth. In this route, it passes by the post nasal sinuses, cleansing all the nasal passages more strongly. In neither version is there any discomfort or damage to the nasal functions. Ideally, at no stage, should any water actually go up into the sinus passages or the eustachian tubes. However, this may happen if the practitioner breathes incorrectly or blows too strongly when drying. In such an event, a few minutes of air drying will usually clear out any stray water droplets.

This only causes momentary discomfort and is not dangerous unless an infection is spread where none was before. However, the rules and procedures of the yogic method of Jala Neti make this very unlikely. The way in which Jala Neti rinses out the dirt and bacteria filled mucous lining would be obvious to most people as the warm water loosens and dissolves any internal build ups, and takes them outwards. But what may not be so obvious is that, due to gravity and a venturi effect, the sinus passages are also drained by the vacuum pressure flow of the water. Whereas it would normally be impossible to drain a "dead end" passage like the sinuses, Jala Neti achieves this ingeniously and simply.

For those with thick mucus conditions as well as those with running sinuses, the relief of sinus pressure can be felt within seconds. As well, the eustachian tubes (which are also dead end passages) receive exactly the same effects as the sinuses, that being – a drawing outwards of dirt and mucus. Hence Jala Neti is of great benefit for blockages and infections of the middle ear, by draining the tubes to relieve the pressure build up as well as removing germs. In a more detailed examination, it would also be seen that through the effect of osmosis and capillary action, the blood vessels of the nose are stimulated to cleanse as well.

The eyes are also beneficially affected by Neti. The tear ducts, which connect from the eyes into the nasal passages, get the same drawing out effect as the sinuses, and this results in a brighter, clearer sense of vision.

Other benefits of Jala Neti

"¢ Neti removes all the dirt and bacteria filled mucus from within the nose.

"¢ It also helps to drain the sinus cavities. This in turn, will help to reprogramme the body's natural mechanisms against nasal infections such as hayfever, allergies, sinusitis and other upper respiratory complaints like sore throats and coughs, post nasal drip, inflammation of tonsils and adenoids.

"¢ It is beneficial for illnesses such as asthma and bronchitis as it reduces the tendency for mouth breathing by freeing the nostrils of mucus.

"¢ It has a cooling and soothing effect on the brain by drawing out excessive heat, and is therefore beneficial for headaches, migraine, epilepsy, temper tantrums, hysteria, depression and general mental tension.

"¢ Neti is of great benefit for problems associated with the eyes. It helps flush the tear ducts, encouraging clearer vision and gives a sparkle to the eyes.

"¢ It can be beneficial for certain types of ear disorders such as middle ear infections, glue ear, tinitis.

"¢ Neti improves sensitivity of the olfactory nerves, helping to restore lost sense of smell, and thereby benefits the relationship with taste and the digestive processes.

"¢ It has subtle effects on the pineal and pituitary glands which control the hormonal system. This has a harmonising effect on emotional behaviour.

"¢ It helps to stimulate better powers of visualisation and concentration and gives a feeling of lightness and clarity to the mind.

"¢ Neti is excellent for those trying to give up smoking. Since it reduces the tendency for mouth breathing, Neti re-sensitises the nose to the actual pollution of ingesting smoke, thereby de-programming the brain of the physical and psychological addiction.

I have been using the jala Neti technique for almost three years and have found it extremely beneficial when I have blocked sunuses and on the odd occasion I get a headache. At first I used it every day for about 6 months, however now I tend to only use it when needed, which is probably not the correct way to do it.

If you decide to try this I would suggest buying a good plastic neti pot as the metal ones tend to discolour which made me stop using it until I bought another one and by the time I got around to buying another one I got out of the habit of using it.