Are you having a bad day?

It seems so when I see you complaining to your friend. He's throwing a party but now it seems you're no longer able to go. 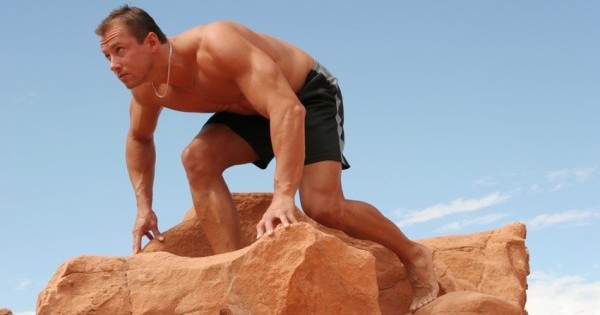 To make things even worse for you, your friend has a lot of single female friends who are going to his party.

You are a single guy yourself and it would have been a nice opportunity to meet new and interesting people and have fun at the same time.

But no, you can't go. You have your first marathon coming up in a couple of days – on the same day as your friend's party.

You are feeling angry and frustrated. You know that this party is going to be THE party to attend to and now you are going to miss it.

You really want to go to the party instead of sweating for 26.2 miles (42.2 kilometers). You are pondering whether or not you should send an email to the marathon organizers to cancel your participation.

Yes, you are really on the fence on this one!

You entered the game but you weren't prepared

Your frustration and anger are based on the fact that you got into something that you weren't ready for. Maybe you were physically prepared for the goal, but the mental readiness wasn't there yet.

When you entered the marathon challenge, you were full of enthusiasm. But at the same time, you weren't quite aware that things won't always go as planned when you need to hit a big goal.

Specifically, you failed to understand that you have to make sacrifices in order to reach your destination. Only this way can you dedicate enough time for your goal and make it happen at some point.

Entering the goal without any mental preparation is going to come back and bite you sooner or later. No matter when it is going to happen, you'll realize that success is not achieved without sacrifices.

Once you enter an unexpected situation without any preparation, your inner resistance is at its highest. It's much more difficult to accept something new when you haven't done any mental preparation in advance.

This new and unexpected choice is going to start an internal conflict inside you: "No, I'm not accepting this!" you think, and you fight back.

However, this fighting makes the situation worse, as you feel even more angered and frustrated. It's like you are unwilling to accept the current reality: you can't have it all – at least not now.

There is another factor, which is a real threat to your goals and which plays a major part in your failures: instant gratification.

You should know by now that reaching goals – whether they're big or a small – requires giving up on something and paying the price. Sometimes that price is big, but other times it's small.

For instance, if you want to become a successful blogger but you don't have enough time to devote to your blog, you'll have to start waking up at 5am. Only that way can you focus on your writing and building your site.

On the other hand, if you want to run marathons in under 3 hours, you have to become a disciplined athlete. You have to be careful in your diet (by avoiding junk food) and do the exercises without excuses – no matter if it's raining or if there is a party coming.

Whatever the case is, there is a price and only you decide if that will be easy or difficult to pay.

First, you should learn more about your goal in advance. This gives you the mental preparation you need and facing the possible setbacks or unexpected situations becomes much easier.

Another important thing that make a difference is your attitude. If you are not willing to accept that you have to make sacrifices, then it's going to be a rough ride for you.

Finally, know that the rewards will be bigger than the instant gratification that is lurking around the corner.

For instance, after running my first marathon, my life changed and I became an athlete. I know that this has been one of the best things that has happened to me in my life and no party can come even close to that experience.

How to pay the price with the least resistance

From now on, before you commit to any goals, it's vital to understand what might be ahead of you.

Use these steps to make journey less demanding for you.

1.Take time to learn. Take time to really understand what you are getting into. Don't just make a promise that you then have a hard time of committing to.

Learn more about the topic and talk to others who have been through the same experience. Soak the information inside you like a sponge, and as much as possible in advance.

This helps you to prepare mentally for the future.

2. Fix your attitude. Another important thing to change is your attitude. In fact, it pretty much determines whether you will be successful or not. The right attitude makes it easier for you to pay the price of the goal.

Understand that you have to make sacrifices until you reach your goal. It could be watching less television, eating less junk food and sweets, running in the rain or waking up early.

3. It's temporary. One thing to remember is that in many cases, the sacrifices are temporary.

If you have to give up television in order to have more time for your blog, remember that this is probably only temporary. When you become a successful blogger, you might have more flexibility and time in your daily life than before.

Finally, when you resist the instant gratification and eventually have a chance to experience the gratification, you don't necessarily want it anymore.

For instance, I used to watch a lot of television and sure, it was more compelling that building my blog at the time. But now that I've been blogging for a while, I don't even like watching the television that much.

I have been able to prioritize these two things and understand that blogging builds my future, while watching television doesn't.

Just imagine what your life is going to be like after reaching that goal. If this vision is compelling enough, then it's easier to pull through the setbacks that might occur down the road.

As you can see, reaching goals is never free and you'll have to pay the price.

Sometimes the price may be small, but in other times it's big. However, you should be aware of this fact before you start reaching the goal.

Sacrifices are part of the game and once you acknowledge them in advance, your journey will be easier.

Over to you: how do you deal with sacrifices when reaching your goals?

Timo Kiander, a.k.a. Productive Superdad, helps entrepreneurs improve their online business productivity. With 18 co-authors (Pat Flynn, Corbett Barr and Steven Aitchison to name a few), he wrote a book about how to build an online business and get stuff done - even when working from 9-5 (available as a free download or through Amazon).