Every adversity, every failure, every heartache carries with it the seed of an equal or greater benefit." "“ Napoleon Hill

This is where I think I am supposed to talk about how content I am. How the years of personal development have brought me the wisdom to accept "what is" and embrace the freedom that comes with that. How I am leaning into this new chapter of my life with grace and dignity. 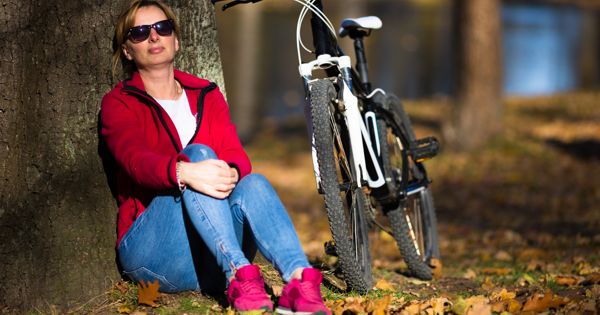 The truth is that menopause is kicking my ass. Hot flashes, insomnia, and aching joints and muscles have turned me into a slug. I'm grumpy, I'm tired, and I'm miserable. I'm probably not all that pleasant to be around. And far from feeling wise and free and graceful, I feel sad and resentful and guilty. This isn't how it was supposed to be.

A mere 12 months ago, I committed to training for a mini-triathlon with my daughter. I was running almost every day, doing yoga, biking and kayaking regularly. I prided myself on being a morning person"”it was nothing for me to get up early at the cottage, hike with my dogs, paddle my kayak, and be back before my husband was awake. Then I was ready to take on the day with an afternoon bike ride or hike. I regularly hopped out of bed long before 6 am for a workout before work.

The last year has brought me not only two frozen shoulders but also chronic joint pain. Apparently it is fairly "normal" in women my age. I feel sad that my body has betrayed me. If it's not my shoulder, it's my hips, knees and feet. I had to change my lifestyle to adapt. First I stopped running up the seven flights of stairs to my office two at a time. Then I stopped taking the stairs at all. Now I rarely even walk my dogs because something always seems to hurt. I am one of "those" people now.

I feel resentful that the promise my life held forth just a few short years ago seems to have dimmed for me. As my children grew and needed me less, I also grew myself, and threw myself into a variety of new projects and hobbies: hypnosis, singing, writing, running, yoga. As much as I loved being a mom all those years, now it was my time, and I was looking forward to it. What I was not looking forward to was falling asleep on the couch at 9 PM. Apparently hot flash-induced insomnia is not conducive to either productivity or creativity"”or even pleasantry for that matter.

My research seems to indicate that this won't last forever, that there is light at the end of the proverbial tunnel, and eventually I will come out of this fog. The prevailing advice seems to wait it out, take it as it comes, and be kind to myself in the meantime. My response to that? Fuck that shit! I want to enjoy my life now, not "maybe" five years from now. I will overcome this. I will not "let" this menopause crap slow me down. Not me. Not now. I have too much living to do.

And yet, I have let it slow me down. And for all the other emotions I have experienced, the one that is hitting me the hardest now is guilt. I actually feel guilty for allowing myself to be taken down like this. I feel guilty that I haven't been able to just suck it up, push through, and carry on towards my goals. Surely that means I am just not strong enough?

I think maybe that is the downside to some of the tenets of personal development. Just do it. Keep going. Mind over matter. And nothing can keep you from your goals but yourself. But what if I don't reach my goals? I really have no one to blame but myself, right? The word failure pops to mind. After all, I am the one who is supposed to help other people attain their goals.

So I started thinking about what advice I might offer someone else in my situation, who has had to let go of a goal. I would probably tell them to look at their situation more objectively, from a less self-recriminating perspective, and to really delve into those feelings of failure, wherever they might lead. I decided to take my own advice, and find out where that would take me.

First I did a little exercise where I imagined myself responding to a friend telling me my own story. Of course my response was much different, and my words were much kinder than the ones I have been telling myself. Surprisingly, the words guilt and failure didn't even come up. It's funny how we often fail to allow ourselves the same compassion that we can so easily extend to others.

Then I decided to dig a little deeper. So I certainly won't be doing a triathlon any time soon"”but really what was the purpose of that goal anyway? I mean, doing a triathlon (even a mini-triathlon, which was my starting point) surely is a worthy goal in itself, but maybe that wasn't all there was to it. I started wondering what the driving force was behind that goal. What would achieving that goal bring me? What was the goal beneath the goal?

I realized that for me the goal beneath the goal was to accomplish something extraordinary"”that was what I was really seeking. Sure I can run, and kayak, and do yoga"”but what I really want to do is rise above the mundane and do something just a little more special. To do something that is more of an objective accomplishment. So let's just put aside the argument for being 100% self-validating for now (because I'm not quite there yet) and go with my actual goal beneath the goal to achieve something extraordinary.

Well, it's pretty clear that 2015 won't have me achieving any extraordinary athletic goals. I also doubt my singing will reach a point where I will be headlining any time soon. But that doesn't mean that I have to let go of my goal of accomplishing something extraordinary. This year did have me put my writing out there publicly for the first time"”and it didn't kill me. Maybe I will get a poem published. Maybe one of my articles will go viral. Maybe I will be on a book tour next year. Or"¦maybe I will just win the lottery and open up a sanctuary for wayward pigs.

I think the key here is flexibility. I don't mean that we should compromise, or give up on our goals"”but rather that we should be open to the possibility they may be expressed in a different way than we had originally planned. And that perhaps what we really desire, deep down, may come to us in a different form than we anticipated.

Maybe I haven't been defeated after all. Maybe I am just being led down a different path. And who knows what I might find there.

Gail is a certified hypnotist, life coach, administrative assistant, wife, and mom to three grown children. She takes a pragmatic approach, understanding that not everyone is ready or willing to throw caution to the wind and ditch their current job/relationship/situation in order to live their passion. Baby steps are OK, and small changes can add up to big rewards. Blog Twitter Facebook