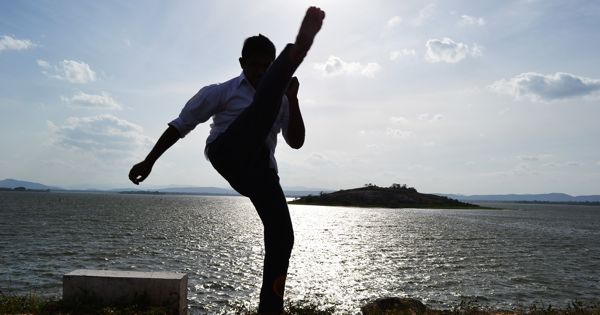 We all know wisdom when we see it. Really, if you think about it, you know what you have to do.

But still, you don’t do it.

I recently spent time with a friend who recounted to me her experience of sitting by her dear friend’s bedside as she breathed her last breath.

As the friend drifted in and out of this world, she shared the hard-earned brilliance of a woman with nothing to lose.

Too often, I think, we believe that there’s something – some knowledge, some pearl of wisdom that will someday reveal itself – perhaps when we too are on the precipice. . .

But actually, I kind of doubt it.

You see, that secret knowledge we’re looking for isn’t really knowledge at all.  The secret of life is not actually new information. It’s not some long-guarded ancient mystery.

It’s the simple courage to act as if we have nothing to lose.

What we seek, what’s missing, is the conviction to act on what we already know to be true.

Most of the time, you know what’s right for you. You can imagine, on your deathbed, what you will wish you did. But the thing that holds us back today from acting with that conviction is, of course, fear.

It’s fear that prevents you from starting a business.

It’s fear that stops you from leaving a relationship you know is wrong for you.

It’s fear that hurls insults at you when you contemplate living your adventure.

Fear is stealing your life.

Now most of the time you’ll hear people talk about “getting over” fear, or “coping” with fear.

Well, to heck with that.

Fear is like an assailant who sneaks up behind you and tries to choke the life out of you.

Should you “get over” or “cope” with this thug?

You should kick it in the face.

There’s no point in being nice when it comes to fear. So here are some tips to help you go all ‘Krav Maga’ on your fear.

1. Attack your fear where it’s weak:  Fear enjoys keeping you isolated. It likes knowing that you’re too terrified to explore new ideas or talk to friends or family about what you’re doing. But the very act of bringing whatever is scaring you into the light of day by very nature makes it less terrifying.

2. Use quick and powerful action: Sometimes you just have to take the leap, and once you’ve done it, it’s done. Fear has no more control over you because you’ve faced it and done whatever you needed to do despite it. So whether you’re jumping out of an airplane or volunteering for a project, sometimes once the door has opened there’s no turning back – and there’s no more room for fear.

3. Scare  your fear: Fear has a way of keeping you small, and preventing you from living the big life you imagine. But if you dwell on the consequences of living a “small” life long enough, that might just scare you into action.

4. Try the belly flop: Sometimes doing something that scares you isn’t pretty. I think about the time I went biking with my brother. Well, I still have the scars to prove I did it. It wasn’t pretty. But that’s ok. I did it anyway.

5. React: Being afraid sometimes stunt-doubles as confusion. Because you’re so terrified, you can’t seem to gain clarity on what your next move should be. Should you quit? Should you stay? Should you start this new thing?  Trying to find the exact right move is so exhausting. So instead of being paralyzed by fear, do something – almost anything – as long as it will help you move forward.

6. Go crazy: If fear is trying to ruin your life, why are you just sitting there and taking it? Instead, fight like you mean it. Pull out all the stops. Pull some hair. Bite some fingers.  Find people to talk to, read a lot of books, do some visualization, meditate – do whatever you have to do to kill the fear and strengthen your resolve to move forward.

7. Simple is good: Because fear is so powerful, we sometimes expect the solution to the problem will be elegant and profound (like years of therapy followed by a huge a-ha moment and a cathartic cry). But sometimes the solution is simple. Sometimes it’s as straightforward as being distressed, but moving forward nonetheless.

8. Use your strengths: What’s going to help you win the fight with fear? Using your natural talents and abilities to propel you forward. If you’re a writer, journal about where you want to be. If you’re a runner, use the mental discipline you have. If you’re funny, use humor to take the situation less seriously. Use what you’ve got.

Fear is the bump in the night that keeps you frozen, unable to live the life that you want. But you don’t have to take it lying down. You can kick fear in the face and move on to whatever you dream of for yourself.

Jessica Sweet, LICSW is a life and career coach. She works with bright, creative people who are stuck in dull jobs and are seeking their next adventure. You can read her blog at http://www.wishingwellcoach.com and learn more about working with her at http://wishingwellcoach.com/wordpress/work-with-me/