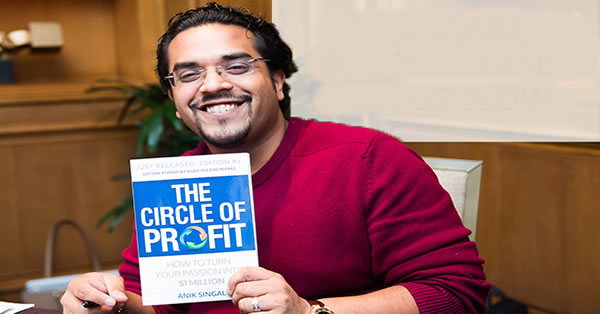 When I first started online back in 2006 I didn't have a clue about how to make money from my passion, which was blogging and writing.

Then I realised it wasn't just about making money and I discovered the key was to have a mission of helping as many people as you can to make their lives better.  That's when everything changed for me and I am now nearing 7 figures per year in my online business.

There were a few people I followed in order to learn the craft of helping people whilst making a living for myself as well.

One of  them is Anik Singal

His book last year Circle of Profit was a real eye opener for me and showed how one person can change the lives of millions  of people around the world, directly and indirectly.

He has now written the 2nd edition of that book: 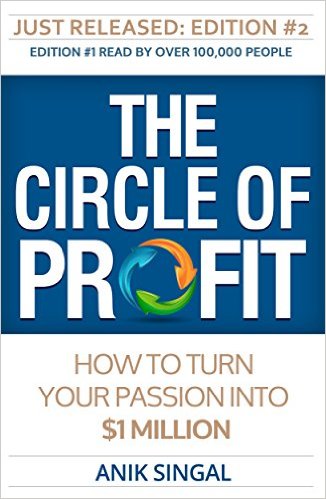 Anik started his online business over 13 years ago right from his dorm room. He had absolutely no experience. He stumbled into the world of information marketing by mistake.

After 18 months of struggling through mistakes and missteps, he was just about to give up when he finally broke the first part of the code.

Within just six years – and all from the comfort of his laptop – he built a $10 million a year business which was operating around the world.

Not an Easy Journey

His journey was not easy. He experienced many ups and downs. He made millions – and lost millions. He nearly went bankrupt while mastering the formula presented in The Circle of Profit. But it was this journey that has led to the world's #1 rated digital publishing system "“ the very same system that has gone on to change thousands of lives around the world.

Since he started teaching this system, Anik Singal has been featured in BusinessWeek as a Top Young Entrepreneur. His Internet business has been featured as an Inc. 500 company for two years in a row, all using the same business systems that he teaches now.

Anik Singal has spoken as a motivational and entrepreneurship coach for thousands of people on stages from Singapore to London to Washington DC. He has influenced the lives of thousands by developing and sharing the simple yet powerful system responsible for his great success.

During his career, Anik  has sold over $100 million worth of digital information online "“ all by using the simple model presented to you in The Circle of Profit.

He has now made it his personal mission to create over 1,000 digital publishing entrepreneurs who will take their passion and transform it into an amazing entrepreneurial venture that leads to their financial freedom.

The Story Doesn't End There

You might be thinking, oh just another internet millionaire story, but NO!

What fascinated me about Anik was the work he was doing behind the scenes to change the lives of millions of people around the world.  Watch this video:

Now that's what I call making a difference and leaving your mark on the world.

What I am starting to realise is that being wealthy is not for the elite, being wealthy does not mean you hoard money, being wealthy shouldn't be discouraged it should be encouraged in order to help more people around the world.  Look at the work Anik is doing in the video above.

You Can't Help People If You Don't Have Money Yourself

When I was working a full time job as an addiction worker and my wife was working as a CEO of a charity for abused women, we were living from month to month: paying the mortgage, paying bills, giving the best we could to our two sons, but we definitely didn't have a lot of spare money to give to charity, only donating around £100 per year to charity.

Now as an online entrepreneur I have given thousands to charity, and no not as a tax dodge, that's actually a myth, but because I see it as me giving back to a world that has helped me so much.

My mission in life, just like Anik's is to help as many would be entrepreneurs to make money from their passion in order to put more money back into the world giving it to those who need it most.

This all started by turning my  passion into profit which is the book that I am offering you today for free: