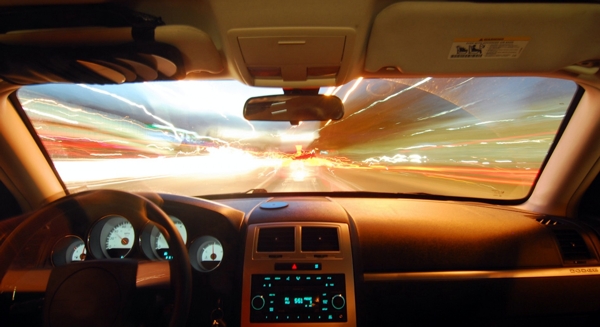 Mindfulness in the Slow Lane

In many places in the U.S., people spend a lot of time in their cars"¦alone. According to the U. S. Census Bureau, over three quarters of the nation's workers drive alone to work. The average commute time? Twenty-five minutes. And just over one out of five long distance trips between 50 and 99 miles are for commuting.

We have lots of time to get lost in our thoughts.

Thirty-five years of martial arts training has brought home to me the importance of mindfulness: conscious awareness of your thoughts, feelings, sensations, emotions, and environment. It is knowing what game you are playing now, and what games others seem to be playing.

You may be playing the game of "safely getting my daughter to pre-K so that I can get to my job at a reasonable hour," but it can easily change to the game of "I'm not going to let that moron get away with that!"

Road rage happens when we lose mindfulness and get stuck in our story"”the narrative that gets substituted for what's really going on. Mindfulness is awareness of the present moment. It doesn't take much to trigger an old narrative, but when we do we are less responsive to our current surroundings and the real challenges they present. We then become part of the problem that affects all the other drivers.

Get Out of Your Head and Back Into the Game

During long drives or when stuck in slow traffic, it is easy to get stuck in your head. Thoughts chase other thoughts and often churn up some emotional turmoil in the process. (This is not restricted to driving, of course.)

This is where those old programs kick in. Something triggers a response that has nothing to do with what is going on now. And that can lead to inappropriate or dangerous actions while driving.

For instance, you had to stay late at the office to finish something, and now you are late for your daughter's recital"¦again. You flash to her disappointment all those other times. But you are stuck in traffic. The frustration builds and you angrily berate yourself. At that point, it's easy to also get angry with other drivers.

So, how do you interrupt this barrage of brain noise?

Here's a trick I picked up from my martial arts. It's so simple that you might have trouble believing it: you point and reach with your index finger. That's right, just reach out as if to touch something: steering wheel, dashboard, seat"¦whatever you can safely reach for. Do it with your index finger. Something really profound happens.

You re-integrate your body and mind. The scope of this article does not allow for a full explanation of this mechanism, but the simple explanation is that it returns your body-mind to a state of wholeness. It reconnects the dots.

But you can't just "think about" your index finger. You have to actually "feel" it"¦ from inside. "Thinking about" something just makes a mental representation. "Feeling" it connects you up.

Try this: Describe your index finger to yourself and notice that you are in your head. Your conscious mind is occupied with identifying the qualities of that finger as an object. Now reach with your index finger and wiggle it. Notice that it pulls you out of whatever you were thinking about. It reconnects your body to your mind.

It doesn't just work while you are driving. It is applicable anywhere. I developed it as a technique while competing in martial arts tournaments. Things could get pretty heated there, so I needed a dependable tool to calm myself down and get centered.

Soon after I discovered this technique, I decided to enter in the superheavyweight division at the US Kuoshu Championships in 1997. I usually played as a middleweight and some opponents outweighed me by one hundred pounds or more. Using this technique, I defeated six opponents much larger and stronger than me in just a few hours.

And if it works while some big guy is trying to knock you down, it'll work in a lot of other situations too.

I call it "Instant Meditation." It clears your mind and gets you centered and grounded within a couple of seconds. Sure, it takes practice to remember to use it when you get upset or angry, but if you practice a lot it becomes the favorite arrow in your quiver.

Another simple solution that comes from my martial arts practice is to clarify the game you are playing.

For instance, some guy in a $75,000 Mercedes with a cell phone plastered to his ear aggressively pushes his way into "your" lane. He doesn't even look; he just goes. You resent it and feel that some retribution is justified. You angrily blast your horn and start giving the guy a piece of your mind.

Except he can't hear you. The only one that is harmed by your angry outburst is you.

As soon as you notice that you are not as calm and relaxed as you were a second ago, try restoring mindfulness.

How do you do that?

Here's what works for me and many others:

First, I point and reach with my index finger and take a deep breath.

Then, I interrupt my resentment with a simple question:

"What game am I playing now?" Boom! That brings my awareness to my current situation and my responses to it. Mindfulness.

If I am honest with myself, I answer, "I'm plotting revenge against the smug bastard that just cut me off."

Then I ask myself, "Is that the game I really want to play?" Hmm. Maybe not. It's not really to anyone's advantage if I speed ahead and cut him off. He probably has no idea of the effect he caused on me and cares even less.

Within a couple of seconds, mindfulness gets the ship back on course and I let go of some unnecessary hostility. It interrupts that old program and brings me back to the present moment.

The drama disappears and the game of driving returns to simple transportation from one place to another.

If you get angry while driving, take it as a hint that maybe that emotion is slopping over into other parts of your life. And that can't be good for your health and well-being.

The tools described here are easy first steps to reclaim your inner peace and happiness.

Rick is an energy healer and T'ai Chi teacher in NYC,
with 30 years of experience.
He wrote his first book, Taijiquan: Through the Western Gate,
in response to a disturbing trend; the objectification of self and others.
This trend is the notion that because something can be described (even vaguely) in mechanistic terms that the idea replaces the event itself.
Rick is available worldwide for interviews, workshops, book signings, and last-minute opportunities. You can read more on rickbarrett.net