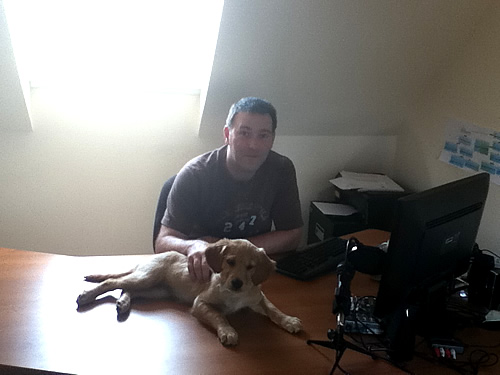 If you have children, if you have pets, if you're a writer, a blogger, a business person, a manager, a teacher, a coach, anything where you are leading  someone or something then by definition you are a leader.

Now, being a leader doesn't necessarily make you a good leader.

We've just bought a Golden Retriever puppy and to say she is a handful is an understatement.   She is a puppy, but full of mischief and fun.   However, she's also full of pee and poo, and needed to be kept an eye on 24/7 whilst we house trained her.

This is where dog psychology comes in. It's totally fascinating to learn about the psychology of dogs and putting theories into practice.

The one thing that has to be established immediately is to show your dog who is the pack leader, if you don't you're in for a rough time.   There's also a difference between being dominant and being a leader, and older dog psychology writings taught that you have to be dominant, and that there is always a struggle to gain dominance.   I don't believe this to be the case with dogs. I also believe this is true of human leadership. There is no need to use bully tactics, aggression or force to show your dominance, a leader leads by example and uses a reward model to train good behaviour and removes rewards for bad behaviour.

Whether we like it or not we are all, to a degree, followers for the most part of our lives.   It's only when we become independent do we make the choice to become a leader.   Now, the following 5 things I've learned is not saying that we are like dogs, but I think it's a good analogy when talking about leadership.

Here are a few things I've learned about being a leader just by training Kara, our 3 month old puppy.

5 Things Dog Psychology Taught Me About Being a Leader

Dogs need clear rules and boundaries.   If you are not consistent with these boundaries then the dog gets confused and pretty soon starts to do it's own thing as it won't know if it's coming or going.

The same is true of humans.   When we are younger we need structure, rules and boundaries to tell us right from wrong.   However the parent has to consistently keep this structure in place.   It has been shown time and again that when a child grows up without boundaries there will, more than likely, be social issues later on in life.

As a leader, consistency, is crucial, in all aspects of your role.   I'm not only talking about rules, I'm talking about personality: moods, treating everyone the same, and no favouritism.   This has to be established straight off the bat.

I had a manager who was so inconsistent with the rules, polices and procedures of our workplace that the team he was leading started to get disgruntled within a month of him being there.   After 3 months they just didn't listen to him any more and relied on each other to get through, and pretty soon the manager was just a face.

Don't give too much leash

When you're out walking the dog, you have to let it know that you are in control and that they can't wander aimlessly and go wherever they want.   A short leash, with a call to "heal" has to be instilled quite quickly.   As the dog gets older, there is more leeway as it has been taught to obey commands and taking it for walks will be a lot easier.   Walk time is for walks, play time is when the dog get let loose and free to wander and run about like an eejit J

Being a leader is the same.   When I am fooling around with my sons and they have overstepped the mark, a simple "˜You're getting close to the line there..' is enough for them to know that certain behaviour is not acceptable.

We made the mistake of buying Kara one of those thick, short, ropes to play tug of war with her.   The thing with that is we teaching her to try and gain dominance over whoever was playing with her, which would not bode well when she is older.   A better game would be "˜fetch', and make it fun at the same time.

If you're a leader you can mentally play tug of war with those you are leading; children, staff, readers, fans etc.   This can manifest itself in lots of different ways.

If you're a blogger and you start to see the size of your email list growing you'll get a few complaints from readers.

I had a complaint whereby one reader said he didn't like what I was writing and thought I was "˜full of shit'.   After I had calmed down, I politely wrote back to him and advised my writing style is not for everyone and he could unsubscribe if he wanted to, that was his choice.   He, promptly, wrote back and advised I should write more of what he liked and didn't want to unsubscribe, which I found strange to say the least.   I wrote back to him and advised I would not change my style to suit one person, stating "˜If I changed my style I would come across as false and insincere.'   He wrote back again, and I just unsubscribed him myself without telling him.   We don't need people like that in our lives, drop that rope, and there's no tug of war left to play.

No sleeping on the bed

All pet owners will know not to let their pets lie on their bed with them whilst going to sleep at night.   Again it's about setting boundaries, the dog has her bed, and my wife and I have our bed.

Same goes with being a leader.   When people look up to you it's unethical and immoral to lead them on to such a degree that they would want to share your bed in the first place.   I don't think anymore needs to be said about this one.

I would never want Kara to fear me.   I reward her with good behaviour and take away the rewards for bad behaviour such as biting.   She has already learned what we expect from her, this way we can all have a great relationship with her, and she does not have to fear us in any way shape or form.

Too many managers, parents, and teachers try and lead by fear.   Whilst fear can be a strong motivator for some, it should only be strong if the person is putting themselves in fear e.g. rushing to get an essay completed for fear of failing a deadline, rushing to complete a presentation for fear of looking stupid.   However, when someone else makes us afraid of them then that's called bullying, its being aggressive.

Leaders also reward for good behaviour and take away rewards for bad behaviour, which can be done in many different ways.

You are a leader!

Most of you reading this just now will be a leader of some sort, you just might not have thought about it before:

If you're a parent, you're a leader

If you're a manager, you're a leader

If you're a writer, you're a leader

If you're a coach you're a leader

If you're a business owner, you're a leader

Leadership brings with it responsibility, but it also has great rewards which can change your life.

Let me know your thoughts on this article by leaving a message below.