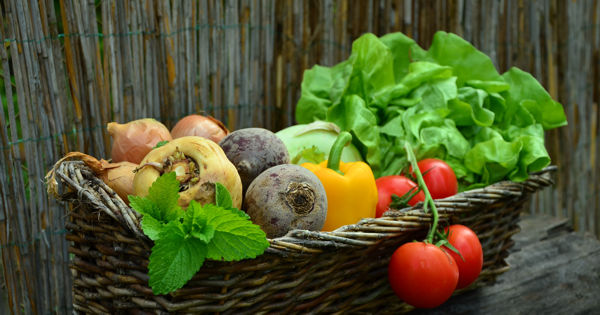 Making small healthy changes in your life is easier to maintain than a huge lifestyle change. A veg box is a small change which could have a big impact on your eating habits, health and overall lifestyle.

According to the Soil Association, who have provided technical advice on the establishment of veg boxes, the first scheme was set up in 1992 with now over 500 different schemes across the UK, promoting local, seasonal and sustainable eating.

Many people are still skeptical as to how a veg box could benefit them. For the converted, it's a no brainer, they're getting vegetables (and other produce depending on their box of choice) straight to their door. If they wanted to, they could live on their box alone for a week, taking away the need for a stressful visit to the local supermarket. So for the skeptics out there, surely reducing time spent in a store is well worth it alone?

Not convinced? Ok, well here are four more reasons why you should consider changing to a veg box.

You'll eat with and appreciate the seasons

It's become all too easy to buy pretty much every kind of fruit and veg in the supermarket, all year round. It's great for variety but not great for your bank balance or for getting the most health benefits out of what you're eating.

Eating with the seasons is so much easier with a veg box as it limits your choice to just seasonal, tasty local produce. By eating this way, you'll be devouring vegetables and fruit which are grown more local to you, meaning that they will be picked at their optimum time because they have less miles to travel. In turn, they are tastier and more nutritional because they've had more exposure to the sun and elements in which they enjoy, thus having increased levels of antioxidants.

By appreciating the season's bounty, you'll be exposed to a wider range of vegetables. You'll broaden your horizons (which have most likely been drilled into you by your upbringing and culture) from carrots and potatoes to whatever's available that month, be it butternut squash, broad beans, sugar snap peas or beetroot. It really is nonsense when people say there's no variety in veg boxes.

On top of all this, your bank balance will love you. Although the veg box will be a set price, you'll have less need to supplement your veg through a supermarket shop. Helping to reduce the need for exotic and out of season produce which often comes with a hefty price tag due to the numerous miles and means of transport they've had to use to get to you.

Veg box veggies are like no other. They will literally awaken your tastebuds and will inspire you to eat better quality produce as a result. There is no comparison with supermarket vegetables, which have, in most cases, been picked before their peak. This means that they're unlikely to be at their freshest, crunchiest, or most flavoursome. All three elements are essential in awakening your senses and help to create an enjoyable experience.

It's no wonder why we all hate brussel sprouts from supermarkets. They don't taste like much and instead are usually a mouthful of mushiness. But if you try the ones you get this winter from your veg box, it's highly likely you'll change your attitude. Even if it is to appreciate their flavour once, and then never touch them again!

You'll be inspired in the kitchen

You'll start to realise that their flavour deserves more than to be smothered in a shop bought sauce and instead you'll be throwing in herbs, spices or just having then unadulterated, centre stage next to a little helping of meat or grains, or both!

Don't worry if you're not all that savvy in the kitchen, most vegbox schemes provide seasonal recipe cards to help you make the most of your box. If there's something different in there, like a globe artichoke, they're likely to provide a short note on how to prepare it and information on what it loves to paired up with. If you're ever unsure about what to do with something, jump on social media and ask them! Most well-established schemes will be available like this because they want to help people learn about their food, eat healthier and to get the most out of the produce.

Seriously, you will. The veggies that arrive on your doorstep will have a longer life than their shop bought counterparts, this is partly because they don't have ambiguous "˜best before dates' attached to them and also because they're picked at the correct time. Most schemes will give you information as to the best way to keep your veg. Who knew that broccoli should be kept in a mug of water in the fridge?!

What's more likely to happen though, is that you'll have more respect, trust and love for the vegetables that you're receiving because you'll have information as to what farm they've come from, how they've been cared for and the knowledge that they won't go off as soon as they get through your door. All of this will mean that you'll be itching to use them up in every meal, not wanting to leave anything out.

There is a bigger picture as well, by subscribing to a veg box scheme, you'll help to promote sustainable ways of living. Veg box schemes reduce their waste by reusing boxes and including recyclable packaging, in addition they keep their mileage to a minimum by having set local area delivery days.

So what's not to love? If you're not completely sold on the idea, why not start by a no-commitment visit to your local farmers market? Make something which really lets the veg sing, and go from there.

Vicky writes on her site, Oh Beans, a blog which aims to inspire people to make healthier choices in life. Vicky has a weekly email where she hopes to challenge your attitudes towards healthy eating and living.