The purpose of this post is to inspire and teach you the 3 steps to take when pursuing your dreams.

For the past two years I have interviewed people from different parts of the world, people who have overcome extreme adversity to achieve extraordinary things.

On my quest for stories of inspiration I was introduced to a young man, named Sai Prasad. Sai lives in Hyderabad, India, and has a unique story because of the law of karma.

Sai's story began as a young child born with a growth on his spine. In what should have be a routine procedure, the operation went horribly wrong -meaning damage to his spinal cord, consequently meaning paralysis from the waist down and life spent within the confines of a wheelchair. 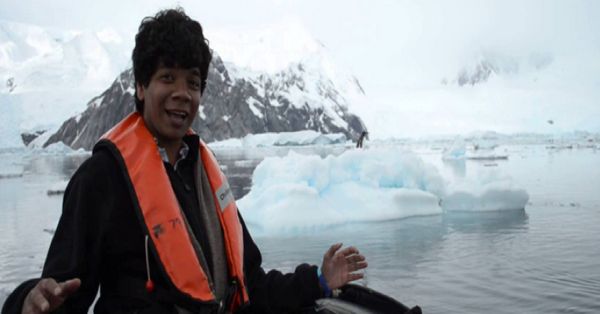 I learned how being born in India with a disability leaves many at the mercy of negativity. Families hang their heads in shame, particularly in rural areas as children are subjected to solitude in their own homes.

Why? Because the strength of karma is so strong. Society believes that if you have you have a disability it's because you have committed an act in a previous life, therefore this is your karma.

The problem with this is the individual who has the disability is also aware, so they feel worthless, their families feel embarrassed, and therefore they keep their children locked away from society because they don't want to suffer the shame, but also they don't want their children to suffer the humiliation, so it is easier to keep them locked away.

There is no support, opportunity, education or benefits and those who do venture out, are forced to look up at passers-by, begging for money to stay alive.

Sai told me:
"˜If I was waiting for a bus, I would feel humiliation. Drivers would look down upon me from their lofty seats, their tired faces casting justice as they drove past leaving me stranded. Was it any wonder that so many people in similar situations to me gave up hope?

I kept persisting. The constant change of schools, 6 in 18 months and wheeling myself along blistered my hands. Just as I built a relationship with a teacher or classmates, it would be snatched away. The fees paid by parents and the competitiveness of schools together with the pressure to deliver results, meant many students with a disability became a circus act. I had no rights and there were no laws to enforce change.

Looking out of the classroom window alone as the students played and built relationships, I sat accompanied only by my loneliness, which is the worst of all human emotions. In my adolescence, I made a decision to learn and make a difference. Disability had reduced the options available to me in achieving this goal and I knew I wouldn't play cricket for India. I could however, use my mind for India.'

Upset and somewhat angered by listening to Sai's story, what is inspiring was his response.

He committed, he decided to pursue education and commented:
"˜The pain of my youth is so prominent in my mind that I never want anybody else to have to experience anything like it. I want people to see the beauty, to taste the air in different countries, see the different climates, rivers and oceans and respect different cultures because we are all equal. Each of us has so much to offer the world. I am just one in a population of over one billion in my own beautiful country. I believe that if I can do it, if I can come through the pain of adversity to move forward and create a new and full life, then so can you.'

Sai beat off the competition to win a place into university. His persistence and good grades meant he became an asset to his school, not a circus act other kids gorped at.

Not only did he gain a university degree, he was now employed by Deloitte who exercised the same policies in the US as in India. Meaning they employed Sai for his ability to add value and use his mind, not his physical appearance.

Sai just 4 years ago in his early 20s had the opportunity to travel to the University of Wisconsin, to study for a masters where he performed a skydive. Filming it, the video went viral – India as a nation wanted to know who was this young man in a wheelchair. Just a year later Sai was being selected to participate in a global expedition to visit Antarctica. He became the first Indian with a disability to visit the continent destroying the beliefs laid down by the law of karma.

So much so that just a couple of years later, the Indian government came to Sai with a challenge. Able-bodied people could not manage the traffic on the bustling, noisy streets with seven and eight lanes of traffic. Sai's solution. He put forward an idea, and now 15,000 deaf people manage the traffic using sign language.

Lessons learned.
What I learned is that there are no limitations. Do not let anyone's opinions or even the strength of a belief system of stand in the way of who you want to become. Don't let a teacher, media, loved one, a hater prevent you from creating what YOU DESIRE.

While I respect the concept of the law of karma I also respect that we can control our own karma in this life, the present. Regardless of disability, you have the power to decide.

3 STEPS TO TEACH YOU HOW TO DO IT.

So starting from now if you are to achieve any dream.

Regardless of any past mistakes as long as you have the ability to think and make decisions, you have a freedom of choice to decide what you want to do.

Those actions led to the consequences of becoming the first Indian with a disability to complete a skydive.

Those actions led to Sai becoming the first Indian with a disability to visit Antarctica.

Those actions led to 15,000 people given opportunities of employment.

Sai's ability to make a stand in a country that was less tolerate of disabilities is an example. His vision was to create opportunities for those less fortunate.

To create a vision you need:
1, Write out what you want in the present tense begin the sentence I am"¦.

And describe it as if you were in that picture.

Measure what it is you want to achieve "“ include specifics and a date when you want have achieved it by – e.g – 23 April 2016

2, Use the 5 sense to help you when creating the vision
Taste
Touch
Smell
Hear
Sight

In the words of Winston Churchill, never, never, give up!

Once you have a vision greater than your fears nothing can stand in your way. Everyone faces adversity, a loss of momentum or criticism, it's part of life. This is why the strength of vision must be so strong, as to achieve anything requires a consistent drive towards to destination despite what challenges may arise.

Sai and many others I have interviewed have achieved because of persistence and no-one said it better than Calvin Coolidge, former U.S President.

"˜Nothing in the world can take the place of persistence. Talent will not; nothing is more common than unsuccessful men with talent. Genius will not, unrewarded genius is almost a proverb. Education will not; the world is full of educated derelicts. Persistence and determination alone are omnipotent. The slogan "˜Press On' has solved and always will solve the problems of the human race.'

Life is too short, create what makes you happy and persist until you achieve it. If I can do it, you can too.