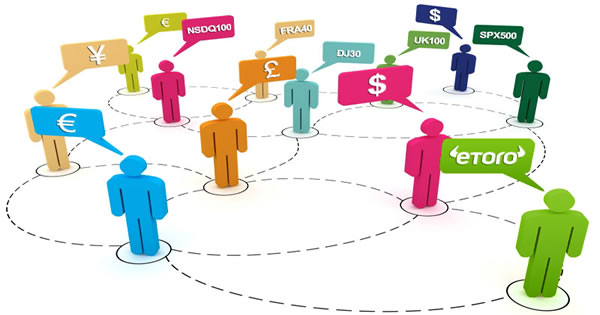 Have you ever tried social trading?

I have recently discovered social trading in the last few months and wanted to share my story here with you.  But first let me tell you a story from a few years ago.

Back in the late 90's I was really big into trading shares and was doing amazingly well by 1999, with over   £60,000 in profit, on paper.  I was invincible, and every share  I studied and bought seemed to go up.  However, it was all driven by Psychology.  Any share that announced it was bringing out a website, just shot up into the stratosphere.  But by the  beginning of 2000, everything started to go pear shaped.  The shares I was holding were going down, and because I had so many I just couldn't get rid of them.  By the end of it all I had lost the £60,000 and another £40,000 to boot.  My dream of being a trader millionaire was shot down in flames, by my ignorance, arrogance and inability to spot the dot.com bubble that was happening.

After that episode I vowed to never trade in shares again, and I kept that promise for around 10 years.  I then started to invest long term into funds.  These were seemingly safe and would bring me around 10% per year, so I started building up a small nest egg for my family.  The reality was, the funds were bringing me an annual return of about 5%, after all the fees had been calculated.  So I started looking around elsewhere, and didn't really find anything for another 5 years.

It was late last year and I was still in the process of building up my business and wanted that nest egg for my family, so I looked into pensions, into SIPPS, into ISA's etc, but as far as I could see they weren't much better than putting money into the bank and saving it.  That's when I discovered a site called e-Toro (affiliate link) Which is a social trading platform.

What is Social Trading?

With my curiosity peaked, I looked into it, tentatively reading up about it.  Basically social trading is about linking traders from all over the world, and you can follow individual traders and even copy their trades automatically.  Here's how  e-Toro (affiliate link) describes it:

"By linking traders from all over the world into one big network, social trading empowers traders to use each other's skills to trade smarter together, and that collective wisdom can take your trading to a level you never thought possible before."

Quite a bold statement to make, but I was starting to see the benefit.

So I opened up a demo account and started following a few traders, just for a little fun.  I quickly found 3 traders who were doing really well and their trades were consistent, which each of them having around 80% success rate on all their trades.

How does it work?

Let's say for example you have $1,000 that you can afford to lose.  You study all the traders and start copying  one of them.  You are only allowed to copy their trades with a a maximum of 40% of your equity (your initial $1,000).  So you would only be able to allocate $400 to that person.

The traders on    e-Toro  invest in a variety ways: stocks, currency, commodities, indexes.  My preferred trading method was to trade in currencies, as I had started reading about strategies etc.

After using the demo account for a few weeks I decided it was time to start trading for real and I had an trader in mind who I wanted to copy.  Over the last few years her trades have been slow but steady and she has an extremely high success rate for every trade she made.  If you want to check her out you can go to    e-Toro  and type in noasnoas in the search bar and you can see her trading history, extremely impressive.

I was making money and I didn't even have to check on the trades every day, I just let it run and would check it every few days.

The trades were great, but the returns for me, were too small.  I had made a few hundred dollars in a few weeks, and decided to start trading myself after having studied the currency markets and kept up to date with the forex news.

I still had noasnoas being copied in the background, she is my safety net.

So I deposited $4,000 in total, kept on copying the trades from noasnoas and traded independently as well, which is the great thing about e-toro.

To date I am around $500 in profit by copying the trades of noasnoas and around $2,000 in profit doing my own trades.

I definitely think copying traders like noasnoas is the way to go, but if you're risk averse I would stick to copying traders and not trading independently until you know the markets well enough to dip your toe in.

I firmly believe social trading is the way to go with investing as it is open, honest and you can interact with the traders you are following and copying.  I am more than happy with  e-Toro  they have been excellent so far and their customer support is great as well, however there are a lot of other social trading platforms out there, so remember to check them out.

You can see all my trades so far by going to  e-Toro  and typing in aitchison21 in the search bar, just to prove I am not lying 🙂 (but please do not copy my trades, I am still learning this stuff.)

Other Articles from around the web that may interest you:

Can you earn a living by copying other traders – Telegraph.co.uk

From Icahn to 'I Can' Social Trading Takes Off – Financial Times

Let me know if you have tried this form of trading and investing before and what your experience was, would love to hear your stories.