There, I said it.

I'm a big loser who fails most of the time he attempts to do anything. 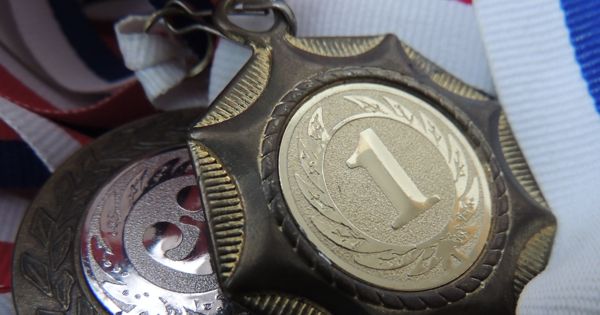 With all the challenges I attempt in life, my success rate must be down at about 10%. However, I still have victories. I still win and this is what I hold on to.

The reason I'm sharing this with you is because I have a feeling you might be in the same boat. The vast majority of us are not born winners. Although we're bombarded with images and stories of all conquering sports stars and internet heroes earning millions and even billions, these people can be difficult to emulate. So difficult, in fact, that most of us get discouraged before we even start to get our great idea or skill out into the world.

If you find yourself in this situation, and are overwhelmed by what you perceive it's going to take to achieve your goals, then I want you to remember this:

You don't need to win every time! You don't even need to be successful most of the time! You just need a few key victories!

Take a look at the following examples.

The winner of this year's Wildlife Photographer of the Year award in the category of Endangered Species. He took a stunning photo of an Amur Tiger in North East Russia as it made a rare appearance by the sea. However, as amazing as the photo is, and as skillful a photographer as Toshiji must be, his success rate on this particular expedition was down at 1.3%.

He camped out in a tiny hunting hunt for 74 days. While enduring cold, cramped conditions and an immense amount of boredom, he also had to put up with the fact that he was failing every day. Despite reports of tigers  being in the area; days, weeks and months passed without even a glimpse. Come day 50, though, and he finally got his shot. Emerging out of the forest into the brilliant morning sunlight was a female Amur tiger. He took the winning photo, stayed an extra 24 days (with no further sitings) and finally returned home.

Was his trip a success? If you're measuring it simply on statistics then the answer would be a resounding no. He experienced an endless amount of time where he was failing to achieve his objective. However, common sense would suggest that it was a huge success. All he needed was that one perfect shot and it didn't matter what he had to go through to get it.

Sticking with the Tiger theme, one would assume that the largest big cat on the planet would be an incredibly effective hunter.  Not so. It turns out that Tigers are only successful on approximately 10% of their hunts. Even with all their power, stealth and camouflage, they fail to achieve their objective nine times out of ten.

Most people have, as it is now calculated to have sold over 1.3 million copies. Then followed The Four Hour Body, The Four Hour Chef and a hugely successful blog. Surely such a successful writer had publishing houses queuing up to offer him deals?

Despite Ferriss appearing to be a phenomenon, this wasn't actually the case. In fact, he's a prime example of how you can fail again and again, yet have one key triumph that turns it all around. The original manuscript for The Four Hour Work Week was turned down by 26 out of 27 publishers (a fact he notes in the updated version of the book). This gives Ferris a success rate of 3.8%. However, this apparently low rate doesn't matter. He held out long enough to have his key success, built his platform and never looked back.

3 Steps to Achieving your Key Victory

I hope these examples ease some of the pressure you may feel. Too many of us believe we have to be perfect in order to succeed. This is simply  not the case. Born winners are rare, perhaps even a fantasy. We ALL have the capacity to string together a few key victories that will enable us to create a successful career, get our message out or even find love.

Most people will try a fair few times before they give up on an endeavor. However, this isn't good enough. You need to develop something beyond ordinary persistence. You need to go into the realms of the crazy and develop 'obsessional persistence'.

This means that you keep going until you succeed. There is no cut off point. Of course, you try new approaches and learn from past mistakes, but there is no turning back.

All of the characters in the above examples possessed this quality. They simply HAD to succeed and this is what enabled them to brush off failure after failure.

You don't have to put all of your effort into every attempt. A Cheetah will frequently pull out of a hunt as soon as it realises the chances for success are slim. It's a strategy you'd do well to emulate. Save your best for the most important occasions and don't become too obsessed with winning. Sometimes the effort put into attaining a smaller goal can detract from the energy needed to achieve the greater one.

3. Focus on improvement, not results

You'll only be ready for this moment if your focus is on improvement rather than results. Too greater focus on the latter will see you dejected as the inevitable setbacks associated with breaking new ground occur. However, if your focus is on improvement – something that you can be successful at every single day – you'll be fresh and eager when an opportunity does present itself.

Combine all three of these steps and you'll have mastered the art of winning without being a winner. And remember, when it's all said and done, it's what we DO contribute to the world that counts, not the failures we experienced along the way.

Joe Barnes writes for the dreamers. If you're tired of hearing what you want isn't possible, and that you just have to accept life the way it is, then he's got your back. Check out his book, Escape the System Now: Discover your Hidden Power and Live a Greater Life, or have a look at his website www.screwthesystemnow.com for more information. Along with writing, he also works as a hypnotherapist and tennis coach.