Many years ago, I was in a difficult situation. I had just split up from my husband, I had quit my job and I had no money (and a huge mortgage to pay). I tried really hard to find a new job but with not much luck. I felt low and scared. That was until I started to pray! Praying was not something I was particularly familiar with. We did it when I went to Sunday school as a child but I had not really been practicing prayer since. But something spurred me on, and I spontaneously started to pray. At that point I was very desperate and I realised that I had nothing to lose. This was not some kind of formal prayer but just my own version. I was simply talking to God/Universe. I had a sense that I needed to connect with something bigger than myself because I was not handling my personal situation very well.

On a subconscious level I had been saying ‘no’ to myself for a very long time. No to my uniqueness, my talents, what I wanted and who I really was, and that is why I think I had ended up in such a difficult situation. I felt deep within myself that it was time to let go of all that. Eckhart Tolle says: Say “yes” to life – and see how life suddenly starts working for you rather than against you.’ 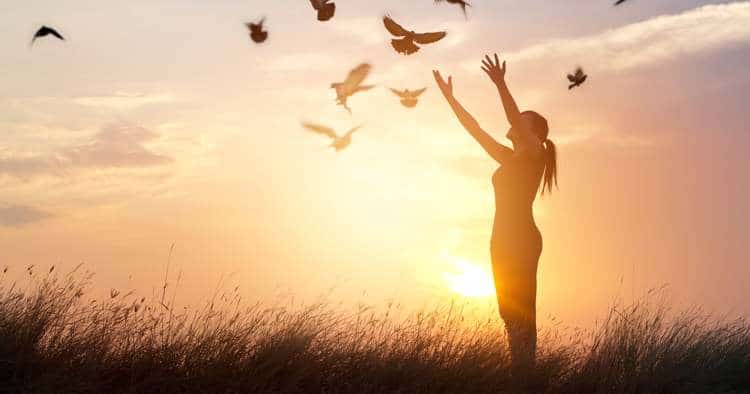 But I needed help. And I just didn’t know who to ask or what to do. So that is why I started to pray. Why not ask a higher power, I thought to myself. I had no expectations whatsoever but thought that I would have a go. I had always been very interested in spirituality and had already been working with astrology for many years, so I knew that we are just a small part of something much, much bigger. The problem was that I had lost the connection with this higher power. Now it was time to reconnect.

So I sat down on the floor, lit some candles, closed my eyes and started to explain to the Universe that I needed help. I visualised that I had a job, that I could pay off my debts, that money was flowing in and that I was surrounded by loving people. And I really put a lot of feeling into those thoughts and images. I repeated this every day, for up to an hour, and I entered into a deep state of meditation. I noticed after a while how my negative thoughts, fear, sadness and desperation started to subside. My situation was still the same, but I started to let go of the worry and started to feel more inner peace.

After a couple of weeks I had a break-through. I received some money from an unexpected source – the exact amount I needed to pay off my debts! And I also found a job. Shortly after that I met my partner, whom I am still with today. There were still things to sort out but at least I was on the right path and could see a future.

So what exactly happened when I prayed? To be perfectly honest, I am not sure but discovered later that a lot of research had been done on prayer and ritual. Dr Stanley Krippner, professor of psychology at Saybrook University in California, has made a vast study of ritual including shamanic rituals and found that they create major neural changes causing the two halves of the brain to synchronize, leading to a better integration between what is considered the executive part of the brain (the cortex) and the emotional centre (the limbic system) and a greater synthesis of thought, emotion and behaviour.

Dr Jeff Levin says that believing in something greater than yourself has a healing power in itself. In his research he discovered that the central theme in all different traditions is that the universe is not subject to random processes but possesses a divine order. The sense that everything has a purpose is in itself very powerful and transformational.

So when I was sitting there on the floor praying, I was starting to ‘reorganise’ my brain! I was making it more coherent and more balanced. I was also starting to let go of stress and tension. I discovered that it is possible to feel relaxed even in the middle of chaos. Because if you are in balance on the inside, you can so much better handle all those challenges on the outside. I also think that I was ‘allowing’ something better to enter my life. Instead of being tense, disappointed, angry and defensive, I started to let go. Realising that if I could just trust, everything would be so much better. I was starting to create a space within myself where more positive things could manifest. And I was aligning with my true self, not the self that I had unknowingly been building up with the focus on pleasing others and ‘fitting in’. I truly believe that when we really start to listen to our inner wisdom we can’t go wrong. Things will work out.

And everything worked out for me, I am pleased to say. I moved from a difficult and chaotic situation to one of happiness and peace. Of course, I am not pretending that there are no challenges nowadays, but there is a vast difference in how I feel about myself and my life. In the end I listened to that inner wisdom and acted on it, step by step. I took the time to go within and be still. I allowed the guidance to come through. You can do that too.

2. Take a couple of deep breaths.

4. You can write down or just say your prayer in your mind. Start with ‘Dear Universe/Divine/Beloved…..

5. Let go and hand over to the Universe.

Rose-Marie Sorokin, a writer, teacher of meditation, yoga, spirituality and personal development, a spiritual coach and astrologer, originally from Sweden but now living in the UK. She is passionate about helping her readers, students and clients move from the impossible to the possible, from chaos to peace and from disconnection to Oneness. She is a qualified yoga teacher, has three different qualifications in meditation and mindfulness and is a lifelong student of psychology, spirituality, somatics, self-development, yoga philosophy, astrology, Advaita and A Course in Miracles. She is the author or ‘The Miracle of Yes – Reconnecting with Purpose, Passion and Peace and Creating a Life You Love. Rose-Marie hosts workshops and retreats in the UK and abroad. You can find her here or here