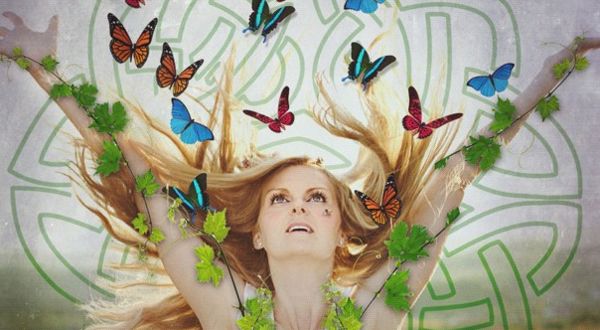 Growing up, its very challenging to even accept – let alone act upon – the dormant thing inside of you that you know makes you special, different.  School is all about fitting in, finding the box that best suits you and conforming to its predispositions.

I was an extremely inquisitive child, philosophical, I liked wearing my heart on my sleeve and I made my thoughts and feelings available to anyone who was interested.   Problem was, nobody was really interested.   And me being me was a rather uncomfortable fit for my well-meaning family.   They were what you might term stiff-upper lipped Brits.   I was raised in a do-honoring family, where you didn’t question religion, nor the status quo or institutions; you just got on with it, like a good girl.

As the state of my inner wellbeing was not apparently significant to those around me it became dis-eased.  Once I approached my teen years I plummeted head first into a heady and dangerous rebellion.   Drugs, underage drinking, reckless sex.  Numbing my consciousness about being different seemed to work, for a while at least.

Mine is not an unusual story; in a society where success is about what you’ve done, not about who you really are and what inner happiness you might have generated its easy to see why you might want to step away from your inner calling and adopt the attitude “˜If I can’t beat “˜em, join “˜em.’

But thank goodness we have pioneers in all representations of human endeavor who have championed a new, better way, despite the consequences. Too many were ridiculed in their time, even tortured and killed.  Yet they held true to themselves, and loyal to what their hearts told them they had come to gift the world with.

The Wright Brothers were seen as crazy in the early twentieth century.  Despite having no formal engineering training they made the first airplane flight.  And they succeeded in showing the doubting world that yes, people could fly.

Jesus Christ defied the ideologies of his day by embracing and loving and healing all, not giving a jot if society deemed them unworthy or not. He brought Love into a world full of fear and pain.

Princess Diana (incidentally but not coincidentally who’s name means Heavenly or Divine) ignored the tight collared restrictions, decorum and rigors of royal establishment in many areas; dress, parenting, relations with the media, attitude, what she did, said”¦ her passion was to serve, not to be served. She was ostracized by the royals, but not by the people.

Ed Sheeran shot to fame because he too dared to be different with his fresh, colloquial, relatable lyrics and playful melodies. He shook the music industry by the scruff of the neck, rebelling against the generic, empty- sounding songs churned out by the world of commercial music.

“There’s never been a melody like you before and there will never be again.” Dr. Barbara De Angelis

As both Dr. Michael Bernard Beckwith and Dr. Barbara De Angelis say, giving birth to your true self is messy and uncomfortable. If you’ve birthed a child, you’ll recognize the final stages of pregnancy; knowing its Time, knowing that you are ready to offer the world a precious new Being, desperately eager to meet the person inside of you that you have nurtured for so long.   Once you have re-birthed yourself – or awakened –   you are in for a glorious explosion of feelings. This is what life is all about!  This is who I am.

These days I’ve swopped self abuse for self love. I’ve never felt happier, healthier nor more vibrant in my life.  And I credit embracing who I am really am with this.  Despite family and friends thinking me a bit strange, I am pursuing my innate need to study spirituality and to spread my thoughts and reflections about life to others.

I broke my mold and I can tell you this; it feels liberating. Have you considered that perhaps you were placed in an environment that was not conducive to your inner aspirations because your soul knew you needed some resistance to really ultimately make you push through these limitations?   Perhaps you were placed in an unsupportive sphere so it would show you, no, you cannot live your life this way and inspire you to reach deep down and reveal the real you.   Many members of my family and friendship circle don’t get or really know me, but that’s ok.  They see what I do works for me and that’s enough for them.  My happiness – although it looks different to their version – nonetheless inspires them to seek theirs.

“I think everybody’s weird. We should all celebrate our individuality and not be embarrassed or ashamed of it.” Johnny Depp.

If you’re going to make a difference, doesn’t it seem logical that you will have to be different?   Follow your flair, pursue your passion.   Would you not regret it more if you didn’t?

Yvette Durham is the founder of Bright Side of Life, dedicated to being that guiding light to your happiness. Travel, yoga, writing and spirituality are among her passions. Having been on quite a journey of self transformation herself, she feels her purpose is to inspire others that, yes, positive self change is possible. Yvette is a British Expat, settled in Longwood, Florida, with her young family. As well as her blog, she is finishing her first book, Buzz Wiser, and can be found @yvetteedurham on Twitter and Instagram, and at Facebook