I'm in my early-getting-on-to-mid forties, and even though I come from a long-lived family, that means that I'm probably somewhere around the middle of my life. I have approximately the same amount of past as I have (likely) future. Sometimes, it seems like I have a tremendous lot of it. When it gets to the point where you can talk about events of 20 years ago and that was when you were a young adult, it hits you – much like that moment when you meet a teacher, or even worse, a doctor, who's younger than you. 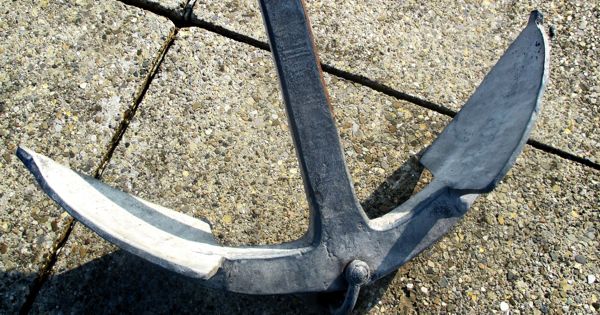 The past is an amazing resource. It contains some wonderful moments and some brilliant lessons. But it also contains a lot of stuff I don't need any more.

My wife and I recently cleared out our garage. We threw out some things we brought with us when we moved more than five years ago, and hadn't looked at since – and some of it had moved with us five years before that, and some of it had moved out of my parents' home with me (where I hadn't looked at it for years previously) and only been touched since when I moved house. I still had class notes from high school which I hadn't ever read over since I passed the relevant exams.

Part of what that exercise brought home to me was that, on the inside also, I've been carrying around a lot of stuff which was unexamined and unneeded, just because I'd always had it.

Those boxes of irrelevant paper, and the occasional useless object, were anchors tying me to my past. Now, I kept a lot of stuff as well – all my creative work, all my photographs, some cards with notes in them from people who appreciated me, reminders of a few good moments. But most of the really valuable memories stay with me without any mementoes.

Unfortunately, so do some of the negative memories. I don't need a photo or a journal entry to help me recall moments of rejection and disappointment, or stupid decisions that I later regretted.

Recently, like a lot of other people, I imagine, I've been reconnecting on Facebook with friends from years ago. In many cases, I haven't seen then in 20 years or more (there it goes). They're middle-aged too. Most of them have married (some of them whose first weddings I attended have remarried, which I'm sad about), most of them have had children, they've worked at, in most cases, I know not what jobs, there's a 20-year gap in our knowledge of each other. Some of them look almost exactly the same, while others I wouldn't have recognised if we passed in the street.

What we have to connect us is shared memories, and perhaps a mutual regard for the people that we were and still, to some extent, are. And yet I've changed a lot in that time, almost beyond recognising myself, and surely some of them have too.

One of the challenges of this kind of reconnection is that there are people in your past who were difficult, who you didn't have positive regard for, and some of them also have Facebook accounts and are in touch with the people you did like. One of my friends recently sent me a friend suggestion for a woman we both knew at the time we first met. That was an incredibly difficult time for me, and although my friend wasn't involved in the negative aspects of it, this woman was. I won't go into detail, but basically she made a bad situation worse through what I still consider extremely poor leadership. And even though I've done a lot of inner work around both that situation and the issues within myself that led to it, after 20 years I'm still not interested in reconnecting with her.

Exercise to let go of that anchor

I've been thinking of this as a fault, a lack of forgiveness, a failure of imagination (I've changed a lot – perhaps she has too? But I just can't imagine her being someone I'd get on with.) But the other way to look at it is this: that's a part of my past I want to leave behind, not reconnect to. Just because I've had it for a long time doesn't mean I have to keep it in the garage.

Imagine a large ship. Maybe a cargo ship, filled with hundreds of containers.

It's anchored to the dock.

Now imagine that it's slipping its mooring and gently starting to move. The dock falls behind into the mist. It's on its way to a new destination.

That was the image that came to me when I thought about the topic of letting go of the past.

Now go back to that image. Close your eyes (when you've read the next bit, obviously) and imagine yourself as that ship, and some dark part of your past as the dock. You can unload some containers there, if you like.

Now let go the mooring lines and watch the dock disappear as you steam off on your new adventure.

You don't have to go back to that port if you don't want to.