My first foray into the world of comedy happened in November 2007. We had a practise session in front of a cosy audience, of just 15 people, to prepare for a larger event the following month. I had written six minutes of material and for the whole of my set I got just one measly laugh; well, it wasn't so much a laugh as it was a courteous token chuckle. I can't even begin to describe what it's like being in front of people telling jokes and seeing only blank expressions in return. 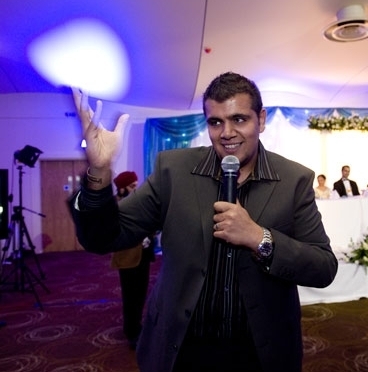 I was upset but I chose not to give up! I bought a book that really helped me get a better understanding of how to construct jokes and how to deliver them. Six weeks later we had our first proper gig for which we had rave reviews and raised nearly £700 for charity. We had 150 people come when we only had 100 tickets to give away. We even had people sneak in while we were performing.

So why would a timid soul like myself enter the world of stand-up comedy I hear you ask? Well, deep down it was something I always wanted to try, but I never really gave it a second thought until one of my coaching clients wanted to become a world famous comedian.

I helped him forge a path and one day he asked me if I'd like to try it out too. I thought, why not?! I had a strong belief that it would help me become a better public speaker; little did I know what other additional amazing gifts it would give me. That is why I encourage more people to give it a try. Fail or succeed, the endless treasures are the equivalent of a personal development junky whose Christmases have all come at once!

Here are ten such extraordinary gifts you get from doing stand-up:

"A word to the wise isn't necessary – it's the stupid ones that need the advice." – Bill Cosby

My friends always considered me a funny chap, but not of the 'witty' kind, they laughed at me rather than with me. I didn't mind, any source of laughter is good with me, but I did want to learn how to be funny when surrounded by people. The first and foremost obvious point is that it helps make you more humorous. What it also teaches you is what is not funny. You begin to understand the mechanics of what makes people laugh. With that skill comes great power. No longer will you be the only one laughing at your own jokes.

"I hope I didn't brain my damage!" – Homer Simpson

Sometimes, all humour requires is the words to be placed in the wrong order. Whatever the order, comedy has taught me something very powerful in that, the order of words can have a massive impact on the message it conveys. If you're not getting your point across take a look at your syntax. Have a play with the words and see what strange bizarre concoctions you can come up with. Syntax is the covert gift of stand-up.

"People always ask me, 'Were you funny as a child?' Well, no, I was an accountant." – Ellen DeGeneres

There's nothing quite like that feeling of being in front of an audience and having everyone's attention on you. Having all those eyes locked on you and you being at the centre of attention….and then falling off the stage. Yep! That has happened to me…twice! If you discount those two confidence shattering experiences, generally speaking, having everyone focussed on you and getting everyone to laugh with you is very powerful. It will take your confidence to a new level. You will still feel the nerves, but you will be much better equipped to handle them.

"All those who believe in telekinesis, raise my hand." – Emo Philips

Most people in the audience want you succeed. The ones who don't, don't worry about them, just turn around, bend over and let them have a good smooch! Either way you will feed off the energy you receive. You will sometimes have great audiences who just laugh at anything you say or do. Sometimes you get serious audiences who are hard work. You will learn to gauge the energy of your audience very quickly. I once prepared some new material and arrived at the venue and I knew straight away that it wasn't going to work. So, if you have that information beforehand, you can be much better prepared.

"What does it mean to pre-board? Do you get on before you get on?" – George Carlin

Everyone has a style; you may just not know yours yet. I've experimented with a few: Dead pan, sarcastic, blue, etc., and I know now that that style of speaking that works for me is being jovial. The audience is the biggest feedback mechanism and you will learn a lot by the way they respond to you. Their response will help you discover when you are congruent with the style that best works for you.

"I've got to keep breathing. It'll be my worst business mistake if I don't." – Steve Martin

Generally when I step in front of crowds my lungs do that crazy thing where they try and hold onto air like it's a scarce commodity, a bit like honest politicians. It's one thing I still haven't understood how to fully overcome but one thing comedy did was teach me the power of the 'pause'. Sometimes the pause can be very powerful and convey more than the words themselves. I used it to great effect recently when doing a speech at a wedding. Silence is powerful; knowing when to use it, is even more so!

"You're about as useful as a one-legged man at an ass-kicking contest." – Rowan Atkinson

When you're in front of an audience of 400 people and there's only one crazy old codger in the front row, with his front teeth missing, cracking up, that truly is a humbling experience. You know that no matter how good you get, there will be times when you, as we say in showbiz, totally bomb! It serves as a beautiful reminder that we are all fallible human beings and sometimes, shit happens.

"I never forget a face, but in your case I'll be glad to make an exception" – Groucho Marx

When you're on a roll, you can laugh with the audience then that laughter becomes contagious. I realised that by doing comedy I was doing a great service to the world. I was helping people let go of their stress poke fun at the things we take so seriously sometimes. One of my first main gags was some toilet humour. Later that evening, during the break, one of my friends told me she was in the loo and people were in there laughing at my gag, doing exactly what I was talking about. What an incredible gift; me being on people's minds when on the khazi!

"I used to be indecisive but now I am not quite sure." – Tommy Cooper

No matter how good you become at doing stand-up you never truly know how the gig is going to go. Before every event I still feel those nerves of uncertainty. But that's a blessing, not only does it keep me humble it also allows me to practise one of the most important techniques in personal development that I've ever come up with. I say to myself: 'No matter the outcome, I will remain happy and learn from the experience'.

This part is one of my favourites of all! Sometimes, when I'm in a cafe writing my material, I'll come up with a gem of a joke and start giggling to myself almost kind of like I'm an evil genius plotting to take over the world and I've found my ultimate evil dominance plan! People might give me strange looks; but I don't care, because that kind of laughter is the most genuine and best feeling kind of all!

Join all those points together and you have the power to totally captivate an audience. I bet you'll never look at stand-up comedians the same way again. Now that you know, do you feel like giving it a go?

"Comedy IS not what you'd expect" – Amit Sodha (ahem)

Amit is the author of UnlimitedChoice.org I'm now 32 years old and I can safely say that in those 32 years I've achieved a lot and experienced a lot in life.
We are all powerful unlimited beings. When we understand that we have the power to choose and shape our future as we see fit then suddenly anything becomes possible.