A few weeks ago I was able to head up to the north shore of Oahu, Hawaii to see some of the biggest waves on the planet. In the winter months the north shore of Oahu sees monsters that draw surfers from around the world. Recently "The Eddie Contest" which sported waves up to 40 feet, was held, which drew thousands and caused massive traffic jams on the whole north side of the island. Mention the word Waimea Bay to any surfer and you'll create drool from their mouths as if they were Pavlov's dog.

I hadn't been to the north shore before, as I recently moved to Hawaii via a one way, but was pleasantly surprised by its sleepy town feel and delightful sense of community. Families were barbecuing in parks along the beach and everyone seemed content. My friends and I made our way to the bay and grabbed our body boards as we stepped out of the car and ventured towards the crowded beach.

I'd never body boarded before, but there was a buzz of excitement and I was ready to go. The water was surprisingly cold and the rushing water began to engulf me and make me it's puppet. The sleepy town feel was soon forgotten as I began a battle with the waves of massive intensity. 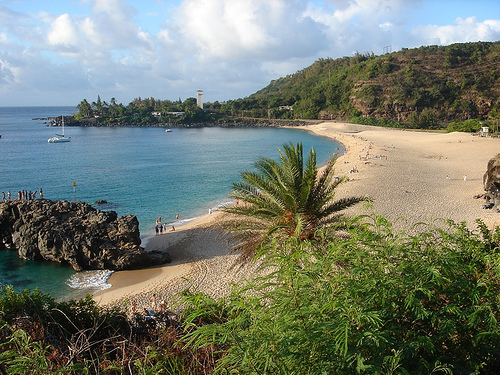 As the waves broke they exerted a surprising amount of force on me; Wave after wave it was relentless. With so much force built up and a momentum that could only be described as ruthless, these waves constantly rejected me from getting past the break point.

I struggled as I attempted to run, then walk, then swim past the never ending force. Giving it my all I pushed forward harder and harder. Suddenly, as if by magic, I had reached past the breaking point and the waves were no long crashing upon me.

As I sat there on my body board past the break point I began to realize that life is much the same, constantly beating us back mercilessly, until as if by a miracle we've suddenly made it. Many of the most successful people I've met in my life have battled with the waves of life for years or even decades before reaching past the break point. To many they look like overnight success stories, but they're the product of their previous battles with the waves. We have to learn to overcome these waves by being even more resilient and more relentless then they are.

Life has many lessons to teach us if we're observant, but these are the 3 lessons the waves taught me while body boarding on the north shore of Hawaii.

1. Waves Will Always be Headed Towards the Shore
Waves will always be coming in. They may change in intensity but, like clockwork, they'll continue to break at the shore. Much like the waves I experienced when body boarding you'll experience negativity in your life and forces that will want to hold you back. These waves of negativity are relentless and will never stop. You need to come to terms with this and act accordingly. Just like the waves kept knocking me back on my way to get past the break point, the waves of negativity and self doubt will keep knocking you back as well. That is, unless you're more persistent.

2. Persistence Always Wins
In my continuous battle with the waves it was two steps forward, one step back. Then two steps forward and one step back; This happened over and over. With each two steps I took, I gained a little more distance and got closer to the break point. Through persistence I eventually beat the waves. Persistence is one of the most valuable attributes you can gain in body boarding and life, which was illustrated brilliantly by American President Calvin Coolidge:

"Nothing in this world can take the place of persistence.
Talent will not; nothing is more common than unsuccessful people with talent.
Genius will not; unrewarded genius is almost a proverb.
Education will not; the world is full of educated derelicts.
Persistence and determination alone are omnipotent.
The slogan "press on" has solved and always will solve the problems of the human race"

You may be the most talented body boarder in the world, or even the most educated person who can explain how body boarding works down to a science, but unless you persist each day against the waves, you'll never truly know what body boarding is.

3. The Rewards of Persistence are Priceless
Once you pass the point where the waves are crashing you'll be in calmer water where you can look back and see everyone else trying to get past the break. Sitting upon my board without resistance I was living the high life, but it got better! I had my pick of which wave I wanted to catch to ride in. What was once my enemy now became my ally as I harnessed the power of the wave and let it propel me forward with such force that it made the hair on the back of my neck stand up. What a rush!

When overcoming your waves through resistance the fruits of your labor will be priceless and just as rewarding as catching a wave in Hawaii. The amount of persistence it takes is directly related to the reward, so the bigger the waves I overcame the bigger waves I got to ride down after I reached the break point. It's a long journey to the break water, but catching your wave is oh so sweet.

Next time you're struggling and fighting towards your goals think of the waves of Hawaii. See your battle as something that is necessary, but also think of the adrenaline rush of the results of your persistence. For me that reward was catching a huge wave and feeling as though I was flying through the air, what will your rush be?

For anybody who doesn't know what bodyboarding is here is a short video:

Images from Maccanti and Smichael

I am a recent college grad with a passion for personal finance, entrepreneurship, mobile living, real estate, and personal development. I recently moved to Hawaii from Wisconsin via a one way plane ticket to follow my passion for scuba diving and am building a Waikiki niche travel website while there. Read more about my adventures and financial perspective at Planting Dollars.