One of my clients, "Sara," had always dreamed of starting her own dance studio, yet she had spent her entire life working in the same office job, which she didn't enjoy.   When I asked her what was keeping her from achieving her dreams, the answer was simple: fear.   Sara was afraid that her studio would fail, and that she would lose the security that her current job provided.

"Joe," on the other hand, had worked in a dead-end job for decades.   He knew that he could find something that would better utilize his talents, but he was afraid to even look.   When he was younger, he had spent 5 years trying to get a promotion and had failed.   He thought that failure was inevitable, so he had better stay where he was, because at least it was an income. 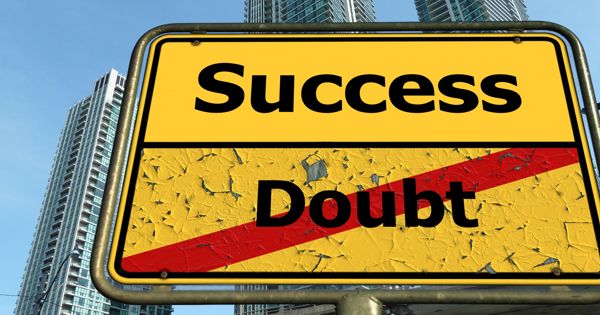 So many of us have stories similar to Sara's and Joe's.   Our fear-based thoughts are holding us back, preventing us from even taking that first step toward achieving our dreams.

The first step toward overcoming fear is identifying and examining the thoughts behind these limiting beliefs.   Only by seeing and looking deeply at them, can we move forward and live the life we truly want.
The following are some very common thoughts that can limit your chance for success:

What is failure?   We often see it as a big "game over," a time when our best efforts did not work, and there are no second chance.   But this simply does not exist.   The only "game over" that there ever can be, only happens in our head.
It is true that if we try, it might not work the first time.   In fact, it is very likely that it won't work perfectly the first time.   But that just means that we can learn from the experience and try again.   There is no limit to the number of times we can learn and try again.

Eliminate the word "failure" from your vocabulary, and you'll be surprised at the opportunities that unfold for you.   The game is never over, unless you decide it is.

So many people are like Sara, afraid to take that plunge, because they will lose the guaranteed security of their current situation.   And yet this "security" is an illusion.   No job or situation is guaranteed.   In this day and age, people can be given the pink slip in the year before they retire.   Nothing in life–jobs, living situations, health–is ever guaranteed.

Moving past the illusion of security is incredibly freeing.   It requires that we realize that we can not predict the future, but that whatever happens, we WILL survive.   And we will survive a lot longer if we are living in accordance with our dreams, rather than spending 30 years in a situation that causes us to be unhappy.

When we let go of the myth of security, we are able to take risks, realizing that we are already living with risk.   Staying in a situation that you think to be secure, is just an attempt to control a future that can not be controlled.

We make up all kinds of stories about ourselves, based on our past.   Because something didn't work when we were younger, that means that it won't work now.   We see our past as a fixed reality, when it is really nothing more than our memories with meaning attached.   And it is only our minds that attach that meaning.

This meaning that we are giving the past can be redefined, even now.   If you think you failed in the past, remember that failure doesn't exist.   So what can be learned from your past?   What happened then, that is different now?   How can you learn from the experience and use that knowledge to try again?

Just as trying to stay in a secure situation can't really change the future, the past is no prediction of the future.   There is no mystical reason that we are doomed to fail, or are incompetent.   Life is learning, and as long as we are willing to see and embrace the lessons from our experiences, failure is absolutely not inevitable.

Examining and redefining old beliefs and thought patterns takes time and discipline, but it can be a very powerful tool to help you get un-stuck and start moving forward toward achieving your dreams.   So if you are stuck in a situation that isn't working for you, take a good look at your fears and the thoughts behind them.

It is the first step toward making amazing positive changes in your life.

Bethany blogs and helps people redefine limiting thoughts so that they can achieve their dreams at Online Life Coaching. She offers e-courses and individual e-mail, chat, and Skype sessions.