"˜The first person to do anything was doing the impossible'

I wish I knew who to quote on this one but I don't. But what a powerful thought to keep in mind, at least for me. Let me explain"¦

When I first got started on the road of entrepreneurship and personal growth, I heard a term used a lot that may of you are probably familiar with. 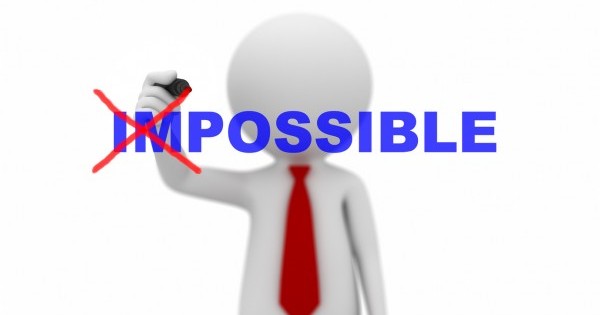 I read and heard that, once I made the decision to go down the path less traveled,   I would encounter these type of people throughout my daily life.   They would be acquaintances, friends, and even family.   The theory goes that they will shoot down your dreams. They'll tell you it can't be done, or it's risky and foolish, that you should just stick to the norm.   Stay with the pack.

It confused me at first. I thought, "˜why would the people that care about me not want me to reach for the stars?'   I'd think to myself, "˜that sucks for other people.   But I don't think that'll happen to me'.

Then it started happening.   I remember trying to start my first venture, a network marketing business on the side of my full time job. Talking about it with friends and family was awkward and uncomfortable. They either didn't understand what I was doing or they thought I was being foolish and just doing "˜sales'. Some thought it was beneath me, having graduated college, to do some part time sales job when I had a good job at a strong financial firm.

Why Would My Friends & Family Treat Me Like This?

Here's the thing. There was never any blatant "˜You're going to fail' or "˜Just give up' or any of those statements. But there wasn't any support, either. The lack of support, over time, chipped away at my self confidence and drive. At first, I was determined to succeed out of spite. But that took an emotional toll. It got to the point where I was questioning myself and wondering what I was doing.

So I learned through experience that "˜dream killers' aren't full-time employees of some Dream Killing company. They're just the people in our lives who don't share the same aspirations as us.  The real lesson was that they don't realize they are doing it. Your guard is down, you confide in them, and then they say something that stings. And it stings because you weren't expecting it.

The people that hurt your dreams the most don't intend to. In many cases, they may not actually know HOW to be supportive.

So It's Not Their Fault?

Everyone knows Bill Gates and Michael Jordan and the Google boys. But they don't know them personally. The majority of people haven't actually seen someone build something from scratch and seen it grow to incredible levels.

I realized that for my circle of influence, my acquaintances and colleagues, 9-5 and middle class was the norm. That's all they knew and they were comfortable with that. Listening to what I wanted to do with my life, my aspirations, sounded impossible because it had never been done "“ as far as their life experience is concerned.

"˜The first person to do anything was doing the impossible'

There's also the subconscious level where some people may not be comfortable seeing others go out and reach for something better. It subconsciously reminds them of the aspects of their life they don't love. It reminds them of the areas of life where they may have settled. So it's natural to want those close to you to stay with you, to be with you. When you step out on your own, people sometimes feel left behind.   Especially when it's people you work with.

My biggest lesson was to understand where my friends and family were coming from. Through understanding, I learned how to not take it personally.   How to not let it bring me down, frustrate me and upset me.   And I still need reminders till this day.

But that quote I think may have cemented it for me.   I think of the thousands of inventions and "˜firsts' in my lifetime alone.   And each one of them changed the way we think and live. From something as great and worldwide as the internet and streaming media that took masses of people collaborating to create "“ to ergonomic chairs to solar powered houses to 100% electric cars all the way to the ThighMaster. There have been thousands of firsts in our lifetime alone. Thousands of impossibilities made possible.

To step out on my own was to forever say "˜I'm doing things differently'.   And with that comes the promise of being treated differently and looked at differently.   My choice is whether I embrace that or bristle at it.