"There is only one thing that makes a dream impossible to achieve: the fear of failure."

Failure is a part of life.

You may not like it, and you may try to avoid it, but let's face it, it's going to happen.

So, why not learn to use failure to your advantage? 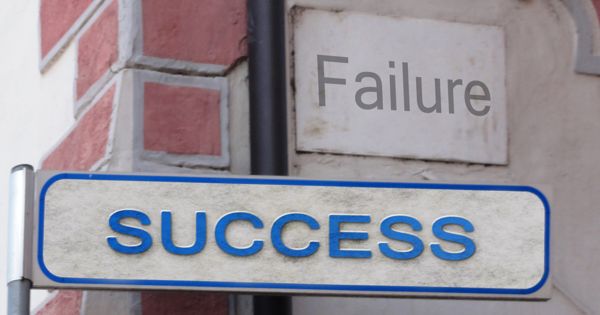 Why not use it as an important experience to help you become the person you are meant to be?

This requires responding to adversity from a place of growth and learning, from an attitude of getting better instead of getting bitter.

I know it isn't always easy, but it's worth it.

Don't take it from me. Take it from the amazing and inspirational figures throughout history that went from barely surviving to using their potential and thriving.

Each of the figures presented have been emotionally knocked down, told they weren't good enough, and completely failed before they ever became the heroes and icons you know them as today.

Take notes and learn from them about how to respond to failure.

Who knows, if you do what it takes, you may be lucky enough to join the adversity hall of fame someday.

"I've missed more than 9000 shots in my career. I've lost almost 300 games. 26 times, I've been trusted to take the game winning shot and missed. I've failed over and over and over again in my life. And that is why I succeed." – Michael Jordan

Did you know that one of the greatest basketball players in history didn't make the high-school varsity team his sophomore year?

He was told he was too short and was cut from the team.

Fortunately for Michael Jordan, he didn't give up. He ended up becoming a 6-time NBA Champion and 6-Time league MVP, and his name is now synonymous with Nike athletics.

"A person who never made a mistake never tried anything new." – Albert Einstein

One of the greatest scientists is history was a late bloomer. Einstein didn't perform well academically, and his teachers described him as a slow learner. He was even expelled from school. Not a good start to a promising life for most kids right?

But young Einstein wasn't willing to let other people's opinions deter him from making a huge mark in the world. He ended up one of the greatest physicists and geniuses of the 20th century, and of course is probably best known for discovering the Theory of Relativity.

"You may not realize it when it happens, but a kick in the teeth may be the best thing in the world for you." – Walt Disney

Before the wonderful world of Disney that you know today was created, Walt went through some struggles. He was fired from an early editing job for "lack of imagination," and went through bankruptcy before he ever created his legacy.

But, like all great visionaries he had big dreams and he believed in them completely. Today, Disney entertainment is one of the most trusted family brands, and is known for innovation and forward thinking entertainment.

"Life is what happens while you are busy making other plans." – John Lennon

Did you know the most famous pop-rock band in history was once playing for peanuts at local bars? Though the Beatles appeared to rise to the top from nowhere, they had to put in their dues.

They were originally rejected by Decca Records before ever being given an opportunity. They were told, "We don't like their sound. Groups with guitars are on the way out."

Despite the naysayers, Beatle mania became a reality. They ended becoming the top selling band of all time and had over 27 number one hits in the United States. Because of this, your children's children's children will be listening to the Beatles.

"Adhere to your purpose and you will soon feel as well as you ever did. On the contrary, if you falter, and give up, you will lose the power of keeping any resolution, and will regret it all your life." "“ Abraham Lincoln

One of history's most wise and poised figures was born into poverty and had many personal adversities in his life, including business failure, tragic family death, and being defeated many times for congress. Lincoln didn't become the president you know him as today until age 52.

Lincoln may be one of the most infamous presidents in history. He led the country through the civil war and was a powerful civil rights leader. He ended up being assassinated for having such a strong influence over the society's horizon.

Churchill was known to have failed his entrance exam into the military academy twice, along with countless defeats in political races until final won at age 62.

Churchill is known today as a prolific leader. He became the Prime minister of England and won the Nobel Prize in Literature.

"Success is stumbling from failure to failure with no loss of enthusiasm."

The one and only Oprah Winfrey was not always so self-actualized. She not only had a poor and difficult childhood, but as she made were way into her career was fired from an early reporter job, and even told she was "unfit for television."

Like everyone in the adversity hall of fame, when told they can't do something, they make it point to reach for the stars. Oprah became a global brand and her TV show aired for 25 years. She is now has the reigns of an entire television network.

"I don't believe in failure. It is not failure if you enjoyed the process." – Oprah Winfrey

"Pain is temporary. It may last a minute, or an hour, or a day, or a year, but eventually it will subside and something else will take its place. If I quit, however, it lasts forever." "“ Lance Armstrong

There are probably people who judge Lance Armstrong for his recent contentious drug allegations. But despite this, he is a prime example of someone who overcame obstacles and lived a mentally tough life.

He was not always the 7-time Tour de France cycling champion you may know him as. He actually lost his first professional race. Even greater is that he was diagnosed with cancer in the prime of his career. Many people would call it quits at this point.

But Armstrong ended up being a cancer survivor, starting the Livestrong foundation, and having more Tour de France victories than anyone in history.

Clearly failure is a part of life. We can't be afraid to fail.

You must try. You must give it all you have.

Learn to respond to failure like a pro. Otherwise you may truly never know what could've been possible.

Joe Wilner is life-transition coach and writes at Shake off the Grind where he helps people thrive when they're up and survive when they're down. He is also the creator of the Becoming Unstoppable. A twelve week ecourse to help you overcome and achieve anything.