Did you know that every word you say and every thought
that you think has a vibration to it.

Dr. Masaru Emoto, A scientist from Japan has conducted numerous studies on the effects of postive thinking on plants and water.  He became famous when his experiments on water molecules featured in the 2004 film, What The Bleep Do We Know? His experiments show that  human thoughts and intentions can  alter physical reality, such as the molecular structure of water. 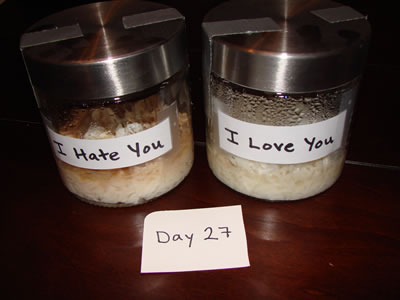 Another famous experiment conducted by Dr Emoto and his researchers showed that negative words and thoughts directly affects the rate at which the cooked rice decomposes.  On one container of cooked rice he wrote "thank you" and on the other "you fool". He then instructed school children to say the labels on the jars out loud everyday when they passed them by. After 30 days, the rice in the  container with positive thoughts had barely changed, while the other was moldy and rotten.

So what does this prove? Well crtics would say it proves nothing, whilst I believe that our thoughts, and the words we speak have a direct affect on everything around us.

There are  lots of experiments that have been carried out similar to that of Dr. Emoto's.

The same type of thing happens in human interactions, no we won't go all moldy if we think negative thoughts but it can spiral into something even more dangerous than mere mold: stress, disease, and depression.

Vibrations of our thoughts and words.

Although you can't see the vibrations of energy that are emitted, unless you were to  do an EEG, which records the electrical activity of your brain, you can pick up on the vibrations from another person unconsciously.

We've all had experiences when we've walked into a house and immediately felt the loving energy from it, or conversely, felt the bad vibe from it.  This is you picking up on electrical activity which has been emitted out to the surrounds of the person having these loving or negative thoughts, and this electrical activity has been transformed into a subtle energy that sticks to the surrounding furniture, the walls, the carpets and the whole air.  Much like the way lightning is created  when tiny positively charged sparks reach up in response to negatively charges in the air or clouds above the ground, so our minds emit these tiny charges of energy, either negative or positive.

So you thoughts and words create this energy and can be felt by others around you, some will fell it much stronger than others.

So, we have to be mindful of the words we speak and the thoughts we think.

No I'm not saying it's all positive thinking all the time, its about remaining in a positive state of mind rather than a pessimistic state of mind.

With that in mind, I have written a list of phrases that you might want to be mindful of:

9 Phrases That Will Lower Your Energy

1. This always happens to me!