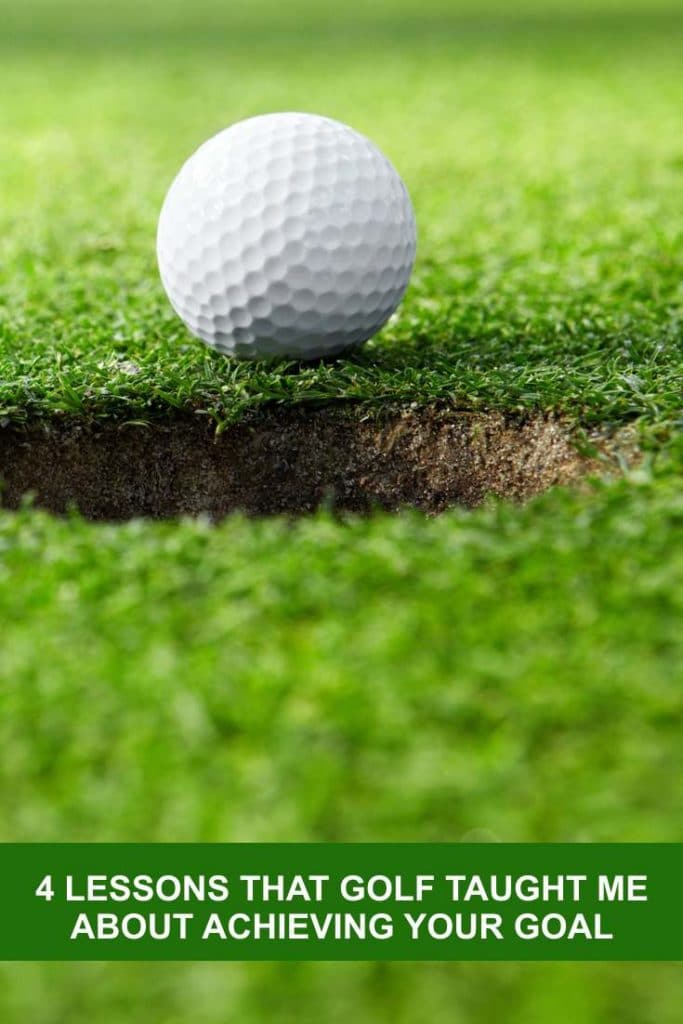 Do you have a goal that feels so big, that you have no idea how to begin reaching for it?

You see other people getting the things you want, but you can't seem to figure out what it is that they are doing differently.

You've tried everything, you've even copied the so called "˜gurus', and yet you fall flat on your face every time.

Well, I've felt that way too.

Years ago, not long after I started working in my current organisation, I wanted to climb the "˜corporate ladder'. Problem was, I didn't have a University degree or any tertiary background to convince management that I was ready or able to take that next step up. 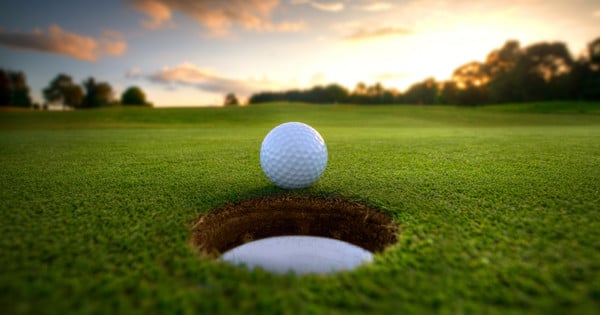 The thought of studying for up to 3 years just in the hope of receiving a promotion was daunting. I was frustrated, without a clue or any idea of how to move forward.

Determined to succeed and push ahead in my career, I stumbled across the game of golf, and found that it not only boosted my career but also my ability to reach my goals. I wanted to move up two levels and secure a Supervisor position, but always thought those jobs were reserved for the University or College graduates.

However, with the skills that I learned from playing golf (such as getting a defined target, training needs, patience and overcoming failure) I was able to secure a Supervisor position and get to where I wanted to be in the organisation.

Here are 4 important lessons that golf has taught me about achieving your goals.

Set a defined target to chase

Golf is all about numbers. You write down your scores and add them all up at the end of the round, and hope to shoot as low as possible.

When I first start playing golf it was all about breaking the magical 100 mark. The thought of shooting 99 or lower to me was like the holy grail of the game. It gave me a target and something to aspire to achieve that kept driving me every round I played.

That goal was always there in the back of my mind, and I wanted it really bad. Heck, shooting a score in 2 numbers instead of 3 made me feel like I was one step closer to shooting a round in the 60's or 70's, just like my favourite golf professional, Greg Norman.

I eventually shot the magical 99 (actually 98 the first time I broke it) through practice, hard work and patience as discussed below. But, without knowing that target in the beginning, I probably would never have gotten there, as I would have had nothing to aim for.

In my organisation back in the corporate world, I commenced at a level called AO2, which was the entry level position for new starters. My goal was to reach a position 2 levels higher at an AO4 position, which meant I got to supervise my own team.

Having this target right from the beginning gave me a clear vision of where I wanted to go and where I could see myself in the future. With the support of my manager and senior co-workers, I identified what I needed to do in terms of training and mentorship to get to that AO4 level.

Just 24 months after joining the organisation, I got to that AO4 level. For me, this was a wonderful achievement, especially considering that I didn't have any University or Tertiary qualifications to fast track the process.

Lesson learned: no matter what business, sport or activity you are engaged in, you need to have a target, a goal or something concrete to aim for. It doesn't have to be big or even amazing, but it needs to be worthwhile to you and something that you believe in your heart is achievable.

So go ahead and sit down and write what is that you want to achieve. What goal is driving you to get up every day? Remember the old saying "If you don't know where you're going, you'll never get there."

Get clear on what's holding you back

To set goals for improving my golf game, I had to do a bit of self-reflection. After each game, I sat down and identified the parts of my game that were my strengths and my weaknesses.

Since playing golf is made up of several different parts – such as driving, iron play, bunker play, chipping and putting "“ it was easy to evaluate my game and find areas of improvement.

For instance, I knew I had to improve my short game (which consisted of chipping and putting) because that was where I was losing shots every round. So, I set myself a goal of improving 1 shot at a time for every round that I played.

After doing my self-assessment, the next step was to practice and get some personal one-on-one instruction from a qualified instructor. My scores started to drop as a result, and I was able to achieve my target goals much faster.

In my organisation, I needed to get clear on exactly what skills I needed in order to reach the next job level up. So, I sat down with my supervisor and asked for help from senior co-workers to identify areas of improvement, and what I could do to achieve them.

It turns out there were many opportunities to develop these skills through internal training courses and on-the-job training. Once I obtained these additional skills, I was in a better position to perform the higher level roles. I eventually got that opportunity by backfilling a higher position when staff were away on recreation leave.

Lesson learned: sit down and identify what areas you need to improve, and develop a plan to achieve them. Some good ideas might be a short course, or some one-on-one training. These are simple things that management love helping staff with and encourage.

Golf is often all about patience. I have days when I'm hitting the ball really well, but my scores just aren't reflecting the effort and determination I'm putting in. On these days, it's important to keep an eye out for opportunities.

Let me explain"¦ A golf ball can bounce in lots of different directions, especially on an uneven surface like a grass-layered fairway. I might be hitting shots straight down the middle of a fairway one day, and the ball gets a bad bounce, rolls over to the side and ends up behind a tree, in the water, or possibly out of bounds. This doesn't mean that

I'm playing bad, it just means the "˜bounce of the ball' is not going my way, and I need to be patient for things to turn around.

It's vital to stay patient, keep your focus and not give up on your goals.

To give another example, I recently played 9 holes with a friend, and thought I was hitting the ball great, but still found myself struggling to compete with him. However, I stuck to the task, and didn't change a thing in my swing.

I just watched patiently for the opportunities when I was in the right position on the fairway to attack the flag and give myself a great chance to make par or birdie. Eventually, the opportunities came and I walked away a happy, smiling victor.

Back in the corporate world (just 12 months ago), I was all set to relieve a higher position. However, a sudden change in structure resulted in another person getting that opportunity. I could have been angry or resentful, given up and left the company, but instead I stayed the course and applied for similar roles in different areas.

Just 6 months later, another higher level opportunity in another department came available and I got the position.

Lesson learned: sometimes you can't force the world around you to co-operate so you always get what you want. It's important to stay patient and believe in yourself and what you are trying to achieve, and wait for those golden opportunities.

Don't be fazed by failure

In the course of your career, you are going to make mistakes. Things will go wrong, throwing a wrench in your plans (like a company buyout, a health scare, or family troubles). You may feel depressed, leading you to question why you committed to such a goal in the first place. When this happens, it's important that you remain calm and do not get down on yourself.

Remember, there hasn't been a successful person alive that hasn't achieved their goals without some sort of setback they've had to overcome. One of my very first rounds of golf was a horrific 145. If you don't understand what that number means, it's really, really bad.

Despite this disappointing round, I was not about to give up. Kind of like my hero, Jack Nicklaus.

Let me tell you a brief story"¦

It was 1962. Jack was a super talented amateur golfer, and much was expected of him in his first professional tournament: the Los Angeles Open. He would be competing against the king of golf at the time: 7-time major winner, Arnold Palmer.

Now, Palmer was a people's champion, and the public didn't take kindly to this new, chubby kid on the course. Throughout the tournament, Jack was heckled about his weight. He tried to block it out, however his game ultimately gave way.

He finished in last place, 21 shots behind the winner Phil Rodgers, and collected a grand total of just $33.33 for his efforts.

But Jack didn't see that first tournament as a failure. He didn't lose faith, he didn't panic, or change his golf swing. He kept his cool and stayed the path.
History shows Jack went on to become arguably the greatest golfer the game has ever seen with 18 major victories. His self-control, confidence and exceptional poise under pressure were the hallmarks to his success in a long career.

Lesson learned: every successful personal in any field of life has had some sort of setback, roadblock or bump in the road on their path to achieving their goals. It won't always be smooth sailing, and you won't always have everything go exactly according to your plan. These setbacks are an important part of the learning process, and it's important not to let them throw you off course.

Stay the path, make adjustments if necessary, but never lose sight of where you're headed.

Where are you headed?

Now it's time for you to sit down, look at where you're at, and where you want to be. This doesn't have to be a long, mind-numbing process. Sit down for 20 minutes and write down the goals you want to achieve in your work, personal or other endeavours.

Next, work out what you need to do to help achieve that goal and identify a few people that you think can help you.

Maybe taking up golf could get you there faster… I know it did for me.

Choose your destination and go for it!

Troy Vayanos has been a passionate golfer for over 27 years. He loves learning and discovering new and unique ways to improve his game and sharing it with others.
He lives and breathes golf from his local golf course in Brisbane, Australia to following the professional tours around the world. His passion for the game inspired him to create his own site called at www.HittingItSolid.com thats sole focus is helping social and weekend golfers fix their slices, hooks and everything else in between.
Visit today at www.HittingItSolid.com and get FREE instant access to 5 videos that will fix every golf swing fault you have.