The Power of Persistence

Failure is a part of life and learning. Even the greatest baseball players in the world fail more than they succeed. They fail to get a hit 7 times for every 3 times they do get one. Does a baseball player think about quitting the game every time he gets out? Is he afraid to go to bat because he might fail? No. He knows he will probably fail 7 out of the 10 times he goes to the plate. He knows that failing is a part of the game. We, too, must learn that failure is part of the game of life. Babe Ruth holds the record for the most strikeouts, but he is considered to be one of the greatest athletes of all time because of the home runs he hit. He struck out 1,330 times and hit 714 home runs during his career.

Tom Watson, Sr., IBM's founder, called into his office an executive whose mistake had lost the company $10 million. The nervous executive entered the office and said, "I guess you want my resignation?" Watson replied, "You can't be serious. We've just spent $10 million educating you!" (Warren G. Bennis, Burt Nanus, Leaders: Strategies for Taking Charge, (New York: HarperCollins, 2003) p. 70) We must come to view mistakes not as failure but as learning. Some seek to eliminate the chance for failure and by default eliminate the possibility of success. "Bill Gates, the founder of Microsoft, has said, "˜I like to hire people who have made mistakes. It shows that they take risks.'" (Michael Pearn, Chris Mulrooney, and Tim Payne, Ending the Blame Culture, (Brookfield, VT, Gower Publishing, 1998) p. 11"“12) 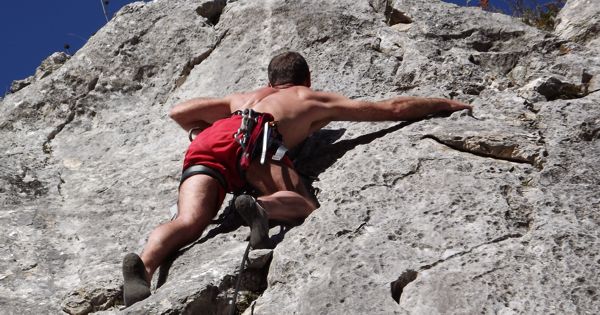 A lesson every man must learn is that he must persist even when it is difficult. When we experience defeat and rejection, the easiest and most logical thing to do is to quit. However, if you give up during the struggle, you will never experience the victory. The formula for success is trying until you succeed. With this view there are no failures only those who quit before success. How many tries do you give a baby to learn to walk? Do you give him five tries or fifty tries and after that say you're done? "You failed fifty times, no more trying to walk for you." Is that how we do it? No. We encourage the baby to try until he or she walks. It is a formula that works and so everyone learns to walk.

When Sylvester Stallone was first trying to launch his acting career, failure seemed to be the one thing he had success with. By 1973, he had been rejected by every casting agency in New York City, with more than 600 rejections total. In order to keep his days open so he could circulate among casting agents, he worked an assortment of odd jobs, including fish-head cutter, lion cage cleaner, usher, and bouncer. Also, in an attempt to make ends meet, he began writing screenplays.

Stallone recalled of his first screenplay, "I had written one hundred and eighty pages of garbage . . . but even though the script was bad, it gave me a sense of accomplishment . . . I did sit down and I did complete a story from beginning to end. For better or worse, it's there. This was something new for me because I was a man who had never passed an English course." During the next year and a half, Stallone wrote eight screenplays but was unable to sell any of them. Stallone decided to move to Hollywood and try his luck there, but he still had no success in selling his scripts.

In 1975, Stallone had $106 ($398 in 2006 dollars) in the bank. His beat-up car had just blown up, so the struggling actor/writer had to hitchhike. To make financial matters worse, his wife was pregnant with their first child. Even though he'd managed to pay off four month's rent with the $700 ($2,600 in 2006 dollars) he'd earned on Death Race 2000, things were looking bleak"”so bleak, if fact, that he was forced to sell his dog and best friend, Butkus, a 135-pound bullmastiff.

He stood outside a store and tried to sell his beloved dog to strangers for $50. Finally, someone bought the dog for $25. Stallone cried as he walked home from the store. The day he had to sell his dog was one of the lowest days of his life. Stallone recalls that day saying, "It was either the dog or us. Trust me. I thought it was over."

Shortly after selling his dog, Stallone saw a fight between Muhammad Ali and Chuck Wepner in which Wepner was a 30:1 underdog. Inspired by this fight, Stallone began developing the Rocky screenplay. For the next three and a half days straight (without sleeping), Stallone and his wife, Sasha, wrote the first draft of Rocky.

Stallone took the finished script to his agent and received an offer of $75,000 ($281,000 in 2006 dollars) from United Artists. This was a huge sum of money to Stallone who had no money and a baby on the way. Stallone wanted to play the role of Rocky, however, and United Artists wanted a well-known actor such as Burt Reynolds, Paul Newman, or Al Pacino to play the lead role. United Artists came back with an offer of $200,000 ($750,000 in 2006 dollars) for the script, without Stallone in the leading role. Stallone refused. The offer went up as high as $340,000 ($1.3 million in 2006 dollars), to which Stallone said, "I would sooner burn the script . . . than to have anyone else play Rocky. Even if the price goes up to a million, no sale."

After Stallone received the $20,000 for the script, he returned to the store, hoping the stranger he sold his dog to would return. After three days the man did return and Stallone offered to buy the dog back for $100. The man refused, saying he loved the dog and would never sell him. Stallone then offered him $1,000 for the dog, to which the man replied, "No amount of money is going to buy you this dog." Stallone, determined to get his dog back, eventually paid the man $15,000 ($56,000 in 2006 dollars) and also gave him a part in Rocky for the return of his dog. In the movie, Rocky's dog is played by Stallone's real-life dog, Butkus.

There are no failures in life, only those who quit before success. Failure is a part of learning. The formula for success is trying until you succeed.

This post is an excerpt from the book Does Your Bag Have Holes? 24 Truths That Lead to Financial and Spiritual Freedom by Cameron C. Taylor. www.DoesYourBagHaveHoles.org