This is not my usual business type article as I will be talking about cryptocurrencies.  If you're new to all of this I would suggest looking into it as cryptocurrency is not going away and is only getting stronger.

I want to tell you about a particular story that has been amazing to watch in action and to actually be a part of it.

A few weeks ago I participated in an experiment started by Max Lee  to start a group of buyers for a certain cryptocurrency called Chaincoin.  I've been buying various cryptocurrency for the long term and also trading them on a short term basis for a few months now.

I was one of the first people to join Max's group on Slack  and heard about his plan to 'Buy and Hodl' (buy and hold for those not versed in the crypto world 🙂 ).  When he announced he was going to start buying Chaincoin at around 8k satoshis (0.00008000 Bitcoin, $0.15) I didn't buy in at first as I didn't really have the money.  But when i seen the power of the group and they were gelling together to buy and hold, instead of pumping and dumping, I knew something big was happening.

The reason they were buying this coin was due to the fact that you could buy a masternode for 1000 CHC's, which is basically a way of earning more coins by setting up a server to make the blockchain stronger and quicker.

As the whole market seemed to be imploding with the upcoming Bitcoin split and all my coins being down a great deal I decided to buy in.  (The coins I hold just now are for the long term so short term drops in price are not concerning)

I bought Chaincoin at 16k satoshis (0.00016000 Bitcoin, $0.31) and managed to figure out how to set up the masternodes so I had 5 masternodes running all earning me extra CHC coins every day.

You might be thinking wow, you must have made a fortune.  I would have if I had sold at that price, I would have made around a $32,000 profit from a $2,000 investment.  However, the whole point of this 'Buy and Hodl' technique is to get as many of the coins as possible (there's only 15 million CHC coins) and keep the price going up.

I have to be honest here and tell you that I did sell out the other day as I panicked when I thought everyone was selling out and all was going to shit.  Had I stayed strong, and believed in the community more, I would still have 5000 coins with the price still rising.  Lots of lessons learned every day in the crypto market.

We should do more of this! – Enter Syndicate (SYNX)

The Chaincoin slack channel and the HighOnCoins Slack channel  showed me the power of community and just what could be achieved by sticking together and being strong.

So I started looking for other masternode coins that looked good, had good developers, had a good community and came across a new group looking to do the same with a coin called Syndicate (SYNX)

The group on Slack called SYNXHodl group is going strong with 1500 members and we are just starting the new journey for Syndicate and getting a marketing team together, getting the developers on board, starting websites, educating newbies about the coin and about masternode setup etc.  It is amazing to see this in action.

We're just starting on the journey for Syndicate (SYNX) and our goal is to help the coin and the dev team to reach at least $10 per coin (currently at $0.15 per coin).

It's that kind of thinking that stopped me investing in Chaincoin at the beginning.  Had I invested at the beginning when Max first announced it, my profit on paper would have been at about $52,000 (as of right now) with a high of around $103,000.

Syndicate (SYNX) is an experiment just now and we'll see where it goes, but as of right now we're at the very bottom at around 7k satoshi to buy (0.00007000 Bitcoin or $0.15).  The group is growing by the minute and as of writing this article it has grown another 100.

The price is low just now but you will see from the graph that there was a huge spike a few days ago.  This was from some of the pump and dumper groups which is different altogether from the 'Buy and Hodl' philosophy.

Philosophy of the Buy and Hodl investing strategy

Okay you might be asking what is this 'Buy and Hodl'  and how does it work?

You've no doubt heard of 'Pump and dump' where a group of people are given a signal to buy a certain stock, or in this case, coin.  Then thousands of people buy the coin at the same time to increase it's value momentarily.  These coins are usually cheap and are not really traded that much. 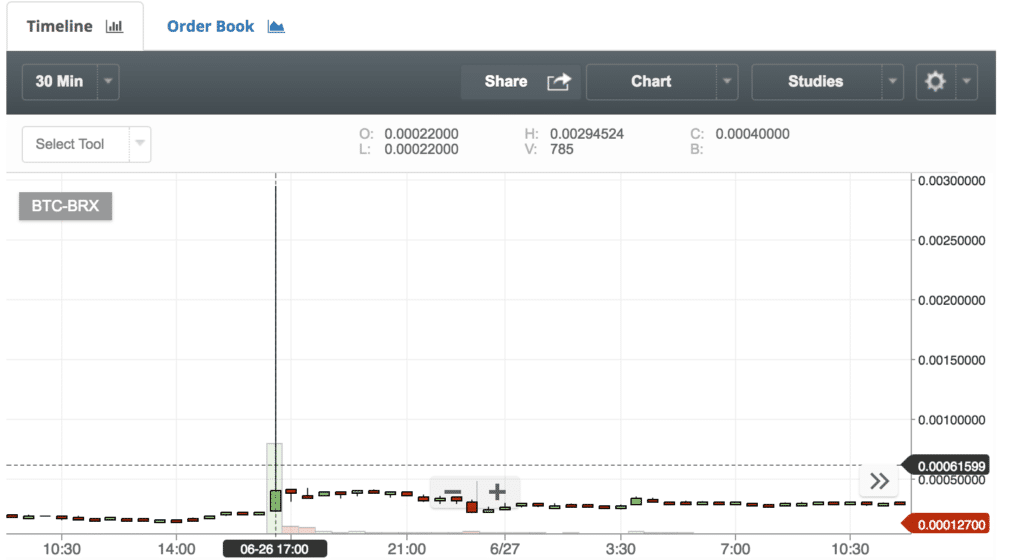 You might think that's amazing, but the only people who win from pumps are the leaders of the pump who buy in early and then announce the pump to thousands of people around the world and they take their profits at the top.  So a pump leader buying $10,000 worth of coin in the days leading up to the pump know to take profit at about 1000% which would be $100,000 worth of profit in the space of minutes.  So you see the only person who benefits is the lead pumper.

The Buy and Hodl technique

The buy and hodl way helps everyone involved: The community, the company, and the developers.

Wouldn't it crash when all the community sold their coins?

With the buy and hodl way, the core community, about 2,000 people in the Syndicate (SYNX) community buy and hold for the long term.  However as a result of increased exposure the coin will naturally attract the attention of people outside the community and more and more people will buy the coin.  This also spurs on the developers to develop the coin as a whole and make it more attractive for future investors of the coin.

Once the coin reaches a certain price it might be time for the core community to exit, maybe 2,000 or more of them, but by the time it hits that price the community has attracted thousands and thousands of new followers and buyers of the SYNX coin so it shouldn't affect the price too much.

The buy and Hodl community is like a marketing machine, they create Facebook pages, create websites, slack channels, ads, write articles, twitter profiles, all to help get the coin more people.  And when you think about it that's is how companies are grown in the mainstream and it's true of companies in the crypto world as well.

So the Buy and Hodl community are the marketing machine of the coin, but they don't get 'paid' for it from the company itself, however they get paid in another way so it's in everyone's best interests to have the buy and hodl mentality.